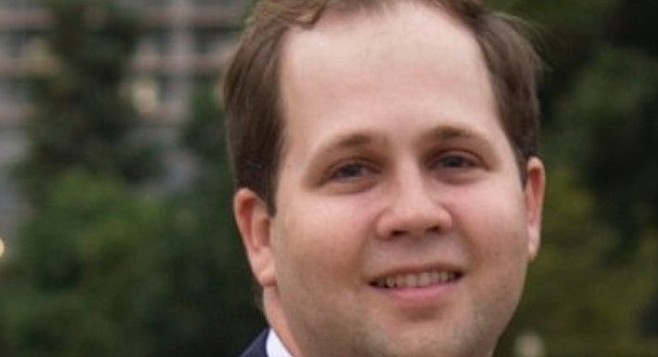 Republican house member Duncan Hunter, a hero to the Union-Tribune when the paper was owned by GOP mogul Doug Manchester, has been in the dog house under the daily's latest owner, tronc, Inc. of Chicago, Illinois. 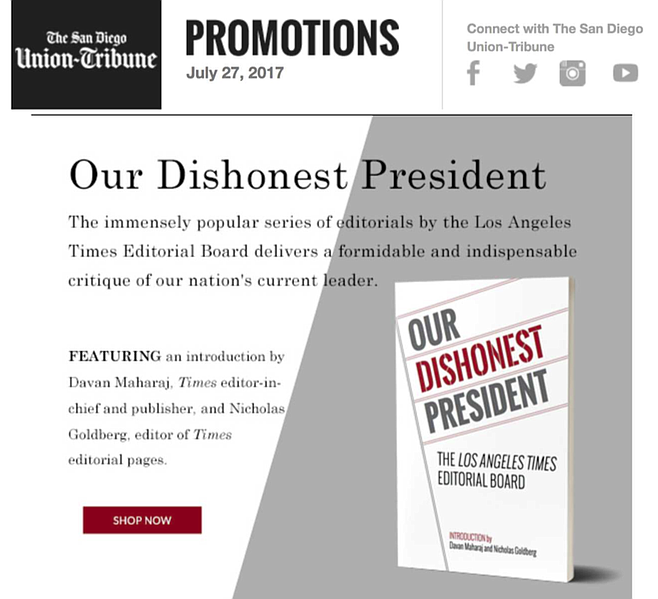 Promotion of the U-T under its latest owner, tronc, Inc. of Chicago

These days, as mega-millionaire Manchester awaits Senate confirmation of his nomination by Donald Trump to become ambassador to the Bahamas, the U-T is sending out emails touting a compilation of editorials by its sister paper, the L.A. Times, entitled "Our Dishonest President."

"Weeks before Donald J. Trump reached his first hundred days in office, the Los Angeles Times’s Editorial Board published the first of six consecutive denunciations calling him 'Our Dishonest President,'” notes the U-T's online shopping site regarding the 112-page paperback, listed at $7.99, currently 20 percent off to email respondents.

"The paper’s condemnation of Trump’s lies, his authoritarian temperament, his war on journalism, and his obsession with conspiracies was as bold as it was unprecedented, as was its call to Californians to oppose the brazen acts of a man patently unfit to preside over the republic. It prompted a tremendous response: within days, the series garnered seven million page views."

In the meantime, presidential loyalist Hunter — being pursued by the U-T and federal authorities for allegedly misappropriating cash from his campaign kitty for video gaming and other personal expenses — dispatched staffer Reed Linsk to a Legislative and Communications Directors Conference to pick up some tips on handling hostile media in the age of Trump.

Hosted by the lobbyist-backed Congressional Institute at the Baltimore Marriott Waterfront hotel in Baltimore, Maryland from May 11 through 13, the event was keynoted by Wall Street Journal editorial board member Kim Strassel, according to the event’s agenda.

Strassel’s talk was entitled "The Intimidation Game," based on her 2016 book of the same name, subtitled, "How the Left is Silencing Free Speech."

Also on the bill, according to Linsk's May 26 post-travel disclosure, was Jason Miller, speaking on the topic of "Dealing with a Media that Sees Itself as the Opposition Party.”

His page on LinkedIn says Miller “served as the Senior Communications Advisor for President Donald J. Trump’s 2016 victory, as well as the Communications Director for the Trump Transition Team.”

Miller had originally been set to become Trump’s first communications director, but was forced to back out of the appointment after word surfaced of an affair he allegedly had with a campaign staffer, Politico reported last December.

Other topics included "Ethics for People Living in the Goldfish Bowl.” A draft agenda said Elliot Berke, — who has been making news this week as chief attorney for newly installed White House communications director Anthony Scaramucci — would appear, but he was replaced on a later version of the agenda by lawyer Rob Walker.

In April, the U-T reported that Berke had been retained by Hunter to deal with the investigation his campaign finances.

With Hunter and fellow House members facing the continued prospect of raucus crowds at district Town Hall meetings, Baltimore attendees received a lecture about "Crisis Management -- Dealing with Professional Disruptions and Verbal Assaults Against Your Boss and Team" from Ed Patru, a seasoned Washington, D.C. public relations hand whose clients include a group known as Friends of Betsy DeVos, Trump's secretary of education.

Rounding out the event, Republican pollster and conservative blogger Kristen Soltis Anderson spoke regarding "Communications with Millennials when a President Trump and the Freedom Caucus Get the Headlines."

The talks, along with meals, drinks, and rooms reportedly worth a total of $739.95, per Linsk's disclosure, were provided free of charge by the Congressional Institute, a non-profit which specializes in furnishing regular Republican staff retreats, according to OpenSecrets.org.

"As legislative director, this trip will educate me on policy issues and best practices in managing the legislative team in my office," wrote Linsk, who has worked for Hunter since January 2013.

This is a very amusing column, noting the incongruity of our once-proudly conservative San Diego Union-Tribune now hustling the tronc-y Los Angeles Times' anti-Trump editorial trifecta-turned-book-for-sale in the Los Angeles Times Store. And then all this other stuff about GOP flacks arming themselves with advice from the likes of Jason Miller, that freaky automaton and Trump aide.

Over this last week Trump humiliated 1) himself by appointing foul-mouthed mafioso Anthony Scaramucci to replace his own ginger press secretary Sean Spicer; 2) his literal early-adopter Attorney General Jeff Sessions; 3) himself again, raving, in front of a Boy Scouts Jamboree; 4) his military Joint Chiefs over unilaterally excluding transgender service people; and 5) his Chief of Staff Reince Priebus. Plus, in spite of Trump's dark threats, Obamacare lives!

Along with Rep.Duncan Hunter's little helper, seems to me like GOP Congressional leaders Representative Paul Ryan and Senator Mitch McConnell and the entire White House staff and Cabinet could use "best practices" tips on how to avoid further in-house nuclear Armageddon at the tiny hands of this bizarre President.

Trump supporters are too stupid to educate. They don't care and won't care until Trump and his lies and false promises affect them. Even then they, like Trump, will blame everyone but themselves. They, like Trump, have the intellectual depth of a coat of paint.