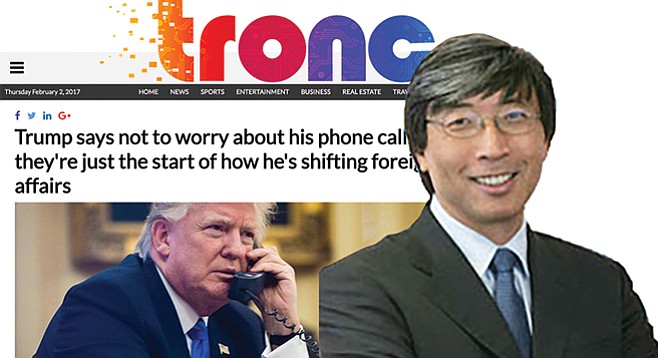 President Donald Trump hasn’t been drawing much support from the traditionally Republican San Diego establishment, much of which derives a big chunk of change from its free-trading ties to Tijuana and cheap manufacturing. Another component of the city’s ebbing GOP passion has been 2015’s transfer of control of the Union-Tribune from Republican kingpin Doug Manchester to the Chicago-based newspaper chain now known as tronc, which has allowed the paper’s editorialists to veer left, including backing Hillary Clinton’s ill-fated presidential bid. “It was the first time since the founding of The San Diego Union in 1868 that the editorial board had endorsed a Democrat for president,” noted the paper’s opinion chief Matt Hall.

But could the U-T’s year-long Prague Spring be cut short by the singular ambition of one of tronc’s biggest shareholders? The website STAT, specializing in news of the medical industry, has reported that Los Angeles billionaire Patrick Soon-Shiong is lobbying Trump and associates to become the administration’s “health care czar.” He “was invited to meet the president and his team and had several meetings and discussions regarding health care issues of national importance, including the need to reform health care delivery rather than just payment,” Ronald Olson, a Soon-Shiong advisor is quoted as saying.

Said to be worth $8.8 billion from biotech stock-market plays, Soon-Shiong last year emerged as an ally in tronc chairman Michael Ferro’s battle against news giant Gannett’s aborted takeover bid. The pair are now the two top tronc stockholders, with Soon-Shiong controlling 16 percent and Ferro almost 25 percent. The U-T has insisted that its ideological slant is determined in San Diego, but the influential Soon-Shiong’s ambitions aren’t easily discounted, and some worry he could be using his purported sway over tronc’s newspapers as a selling point with fellow billionaire Trump.

A precedent for such influence came last March when tronc-owned papers, including the U-T, lined up as one to condemn the Obama administration for killing a tronc takeover deal for the Orange County Register and Riverside Press Enterprise on anti-trust grounds. “By consolidating back-end operations, we are able to save money in ways that don’t directly affect readers,” opined the Baltimore Sun. Added its sister, the Florida Sun-Sentinel: “Partnerships and the acquisition of regional newspapers are helping metro dailies stay in business and focus on what they do best: telling people what’s going on locally.” Tronc’s failed Orange County deal, pronounced the U-T, “might have meant higher journalism standards and consolidations that could have preserved more journalism jobs.”

Appreciate the effort, Matt, but as sometimes happens there is a lack of focus. A meandering column that hints at interesting information but fails to deliver any substance. Looking forward to the day when this links with additional information to give a sense of direction for the U-T, the owners or anyone of interest to Reader readers. Thanks for so many informative articles over the years.

Since Papa Doug sold the UT it hasn't had any direction.