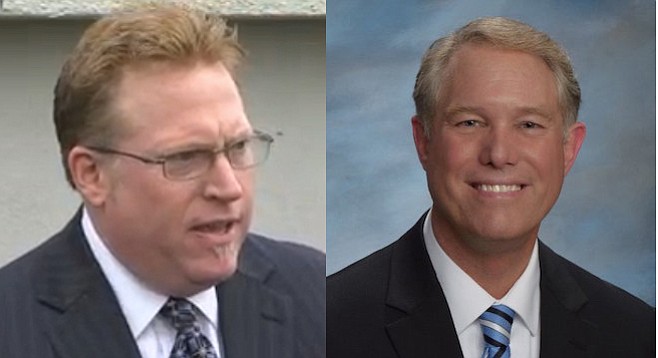 The fight over public employees' use of private devices to send emails and texts and the refusal from agencies they work for to turn over those missives has landed Grossmont Union High School District in court.

Measure BB, approved by voters in November 2016, is expected to raise $128 million to pay for upgrading classrooms and completion of infrastructure projects. In the days leading up to the election, allegations were made that Glover began using his position, and personal devices, to lobby for the measure's passage and urge employees to help campaign. In late October, Briggs submitted a public records request asking for copies of Glover's emails and text messages on both district and private servers.

In his request, Briggs said he had reason to believe Glover "may have engaged in illegal, potentially criminal, political activity" by compelling teachers, students, and parents, on private and public servers, to campaign for Measure BB during district hours, including making campaign calls. Glover also allegedly used district funds to buy food and refreshments for those working the phones.

Attorneys for Grossmont Union High School District denied any such violations occurred and declined to turn over emails or texts.

After a series of email exchanges, Grossmont attorneys rebuked Briggs for alleging any wrongdoing while admitting that mistakes were made.

"[T]he allegations are completely false and extremely disheartening for Dr. Glover," reads a November 18 letter from the district's outside counsel, Peter Fagan. "District staff, including Dr. Glover, who in their private capacity worked on the bond campaign, were directly educated about the rules and regulations.... Dr. Glover and other District staff were careful to adhere to the strict rules and regulations related to the bond campaign."

Fagan then admitted errors did transpire.

"However, there were a few times that Dr. Glover and/or other district staff inadvertently sent bond campaign messages over the district server instead of only using personal emails. Such emails include those district employees inadvertently sent from their district accounts to Dr. Glover's personal account. Again, there was no direct effort to send emails using the district system, rather the only intent was to abide by the rules and regulations. The mistake of using the wrong email address was a very rare occurrence."

For now, the scope of the lawsuit rests entirely on potential violations of California's Public Records Act. It is unclear if additional legal action over alleged campaign violations is underway.