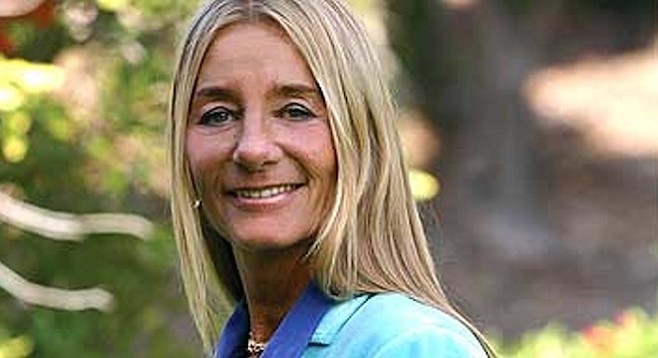 Frye comes in for the kill

In January 2014, former city councilmember Donna Frye, now president of open-government group Californians Aware, and the group's lead attorney, Terry Francke, urged San Diego city councilmembers to place an initiative on the 2014 ballot that would grant public access to all emails, memos, and text messages from elected officials. Frye and Francke touted the ballot measure as one that would transform San Diego into one of the most accessible and transparent cities in the state.

Their proposal was met with resistance. Frye and Francke, as well as councilmember David Alvarez, said the city attorney and then-council president Todd Gloria didn't give them a fair shake, refusing to meet with them and then by not docketing the item so as to allow passage.

“I don’t think there was a good-faith commitment from the City Attorney’s Office to allow the ballot measure to move forward for voter consideration, and that is unfortunate for the citizens of San Diego,” councilmember Alvarez told the Reader in 2014, shortly after the majority of the council rejected placing the measure on the ballot.

Now, two years later, Frye and Francke have returned, this time with a simpler and more direct measure. The new measure would classify any email or message dealing with city business open to the public, regardless of whether it was sent on a private device or not.

Reads the proposed measure, "All documents, communications, and other writings, including emails and text messages, recorded in whatever medium, created or received in the course of conducting any city business by its appointed or elected officers, employees, departments, bodies or agents, are deemed to be used and controlled by the City for purposes of public disclosure."

Frye plans to present their proposed ballot measure to a city-council committee on January 13.

In a January 5 memo to San Diego city clerk Elizabeth Maland, Frye included California Aware's reasoning for pushing the measure. "In other words, city officials should not be able to use their private cell phones or computers as a means of preventing disclosure of the public's business."

The issue of public officials using private devices and private email accounts to conduct city business has been raised in cities throughout the state and the country. In San Jose a judge ruled in favor of a resident who sued after city officials refused to turn over public emails they sent on their private devices. Appellate court judges later overturned the ruling. The case has since been taken up by the state's Supreme Court.

In San Diego, city attorney Jan Goldsmith and city attorneys representing him have fought the release of emails he sent from his private device and private emails. The resulting court case, filed by open-government attorney Cory Briggs, has lasted for nearly two years.

In October 2015, an appellate court upheld the ruling of a superior-court judge that deemed any email pertaining to city business sent from a private device was a matter of public record.

The lawsuit is still ongoing, with both sides grappling over review of thousands of pages that Goldsmith sent to the League of California Cities from his private accounts.

Frye hopes the new ballot measure — if placed on the ballot and approved by voters — would avoid similar cases and any potential backroom dealing. To build support, on January 8, Frye penned an op-ed article for the San Diego Union-Tribune.

"Unfortunately, technology has outpaced the laws and many of our elected officials have been reluctant to act to address this fact," Frye wrote. "They believe that if they conduct the public’s business on their private cell phones and email accounts, it allows them to avoid making that information public.

"They do not think the [California Public Records Act] applies to communications about government business if those records are maintained on their private accounts. They argue it is not 'a record retained by the government' and therefore is not subject to public disclosure.

"This sort of twisted logic is so off base that even a knucklehead could see the flawed thinking. If this premise is carried through to its illogical conclusion, it would mean anytime a government official wanted to shut out the public, he or she could simply use personal cell phones and private computers to communicate and avoid public disclosure. And many of them do just that — some because they don’t think and others because they don’t want the public to know what they think or with whom they are conversing.

"Californians Aware believes the public has a right to know what its government officials are doing and has introduced a ballot measure to address this problem. Our proposal will prevent public officials from evading disclosure of documents by hiding them on private email accounts. It is simple and straightforward and says if a city official uses personal devices to conduct the public’s business, it is a public record and subject to the California Public Records Act disclosure requirements."

You GO, Donna! Too bad she didn't get elected mayor.

Instead we got Sanders. Hard to beat the downtown power clique.

Note to all: (especially politicians and their minions) If you don't want it published don't write it and don't record it. If you want something kept private then do not do anything that will allow it to be aired in public.

The Ralph M. Brown Act and later-enacted CPRA are vital tools to bring greater transparency by our government officials. The CPRA, however, needs reform to make it even stronger because of the built-in exemptions that are subject to regular abuse.