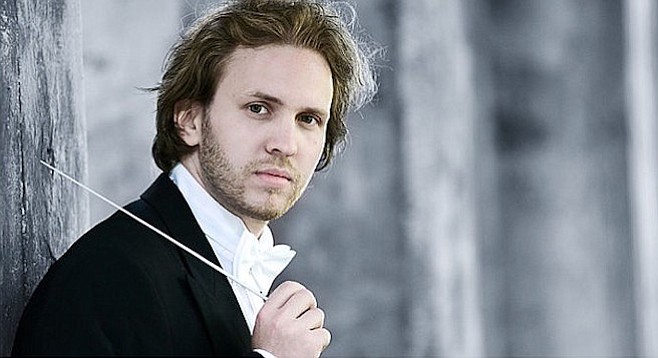 David Danzmayr was yet another guest conductor at the San Diego Symphony for the concerts of the first weekend of December. If a super-energized conducting style is your cup of tea than Danzmayr is your man.

The concert blasted out of the gates with an overture by a little known female composer named Grażyna Bacewicz. I should say Bacewicz was relatively unknown. She was a well known composer in her native Poland. Her Overture 1943 was compelling enough to get me to explore other pieces she has written. 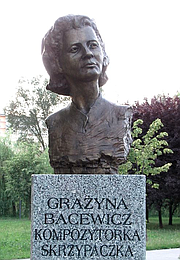 Frederic Chopin was also from Poland. He’s known quite well. The performance of his Piano Concerto No. 1 by George Li was good but stopped short of the sublime. A big part of that is Chopin's fault.

Chopin wrote this piano concertos when he was 20-years old. As such this isn’t the greatest piano concerto of all times, but the piano part is more than worthwhile, and I found the piano/bassoon duet in the second movement to be effective.

Chopin wrote both his piano concertos as concert pieces for himself. According to the symphony program notes the solo piano concert did not exist at the time, so Chopin simply wrote a couple of piano concertos to show off what he could do. That’s one way to make your own opportunities.

The Dvorak Symphony No. 8 was the final piece of music on this traditional overture, concerto, symphony program. What can I say? That approach to programming just works.

Dvorak’s eighth reminds me of Beethoven’s Symphony No. 8. It is a lyrical affair sandwiched between a heroic seventh symphony and a game-changing ninth symphony, just like Beethoven’s eighth.

The performance was beautiful, and Danzmayr whipped the orchestra up into a frenzy. But when all was said and done it was still Dvorak’s eighth. I think a reply from a friend I invited to this concert best summarizes it. “I think I’m going to put up my Christmas lights instead.”

I’m going to blame happiness for the quality of the eighth. Dvorak wrote this music during a period of contentment when melodies were pouring out him. The eighth is melodic and exuberant, but I prefer the drama of the seventh, the longing of the ninth, and even the lyricism of the String Serenade. Happy stinks.

I can't help but notice that the programming at the symphony this year feels a bit off. There doesn’t appear to be a peak concert such as we’ve enjoyed in years gone by. An argument can be made for the upcoming Sibelius’ Symphony No. 5, but it is not of the same dimensions as a Bruckner Symphony No. 8 or Mahler's Symphony No. 6.

One can only wonder how much the open music director position is affecting the musical selections. The symphony leadership has done a good job in creating several weekends which have two masterworks performances instead of three. The concerts feel better attended and that makes a huge difference.