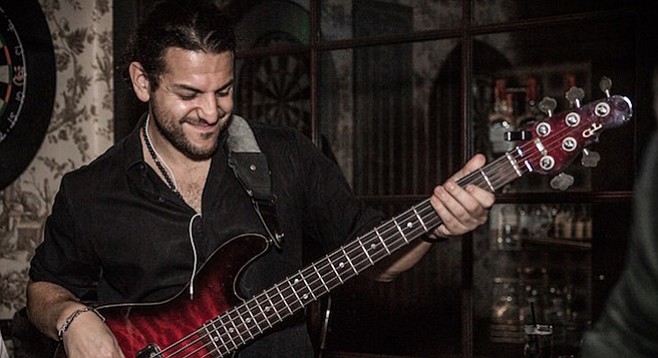 And that's after his day-job, folks

It’s hard to imagine that there is a busier musician on the San Diego pop music scene than bassist Jacob Miranda. He plays in nine bands; two of them, Sister Speak and the Lyrical Groove, recently won San Diego Music Awards for Best Pop and Best Hip-Hop, respectively.

Miranda divides his time between groups that specialize in original music, recording sessions, and more corporate-type gigs. “My problem is I like to work,” laughs Miranda following a full day’s shift and a three-hour rehearsal. “And I like to network and meet as many people as I can. I don’t like to let anything slip through my fingers.”

Miranda has also been employed as a practical nurse for seven years. “I work about three to four 12-hour shifts per week,” he said. “Right now, my schedule is 7 a.m. to 7 p.m. Usually, I’m getting out of work, changing in my car, and heading to a gig or rehearsal. I kind of make my own schedule....

“Sometimes I can get burned out playing music and I’ll concentrate on the nursing. I’m really good at that job — I’ve won a few awards there, too — for bedside manner and just taking good care of people.... Being a nurse keeps me grounded because I’m needed there. As I get older, I’m starting to realize that I can’t go meet friends for drinks or pull these late-night shenanigans because I have to get up early.”

Last year, Miranda released his first solo album — Enlightened Intentions. “It started out as just beats — more in the R&B realm — because I was working in that field a lot. It’s kind of like a mix tape: it represents all the genres I’ve been working in that I wanted to crush together.”