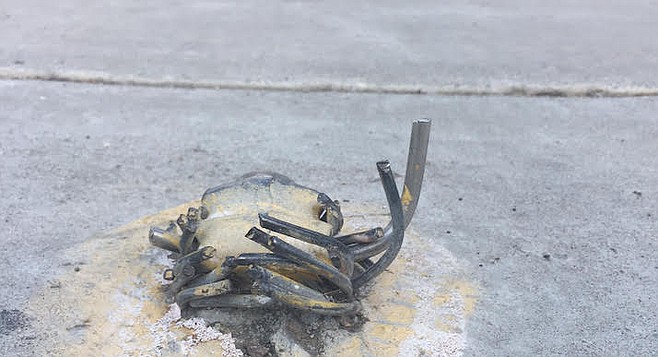 New metal base for signs part of the problem

“I’ve tripped over that metal piece so many times [that] I stopped counting,” said Sharon, as she walked back to her car that was parked on C Street under the Interstate 5 overpass. “I’ve only hurt my toe, nothing big.” 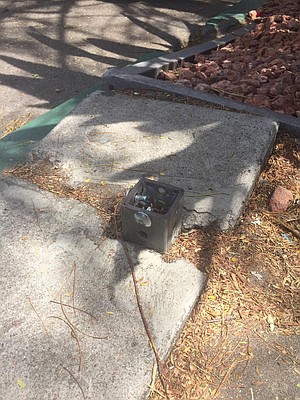 Near Family Dollar store. When the new signs are removed, the base remains, and sometimes the metal is sharp.

Sharon, 18, is a City College student, and was referring to a remnant of what appeared to be the base of an old street sign on the sidewalk of C Street (by the freeway entrance). On April 11, after she left cosmetology class, she pointed at the metal three-inch shrouds protruding from a bigger chunk of metal. The protrusion was fastened to the cement and the paint that surrounded it had faded. “I can remember [seeing it at] the beginning of my school year, I started school [in] August 2016, and I always passed the metal piece because I park my car under the bridge. It’d be nice if someone removed it.” 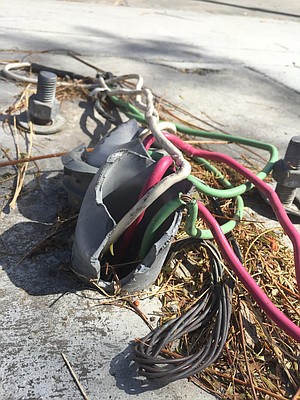 The other students that walked by agreed, and said that it was possible for the metal shrouds to penetrate through a shoe – or a bike tire.

“I’m not going to touch it to find out how sharp it is,” said Amanda Penny, “it could potentially cause a hazard if a person wasn’t looking at the right place at the right time.” 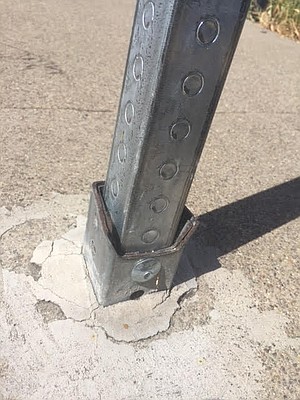 Penny, 41, is a student as well. She has been riding her bike everywhere in San Diego for decades and is always on the lookout for the safety of others.

In the last couple of weeks, the buzz on some of the San Diego street-threads is on the subject of sidewalks. Many homeowners are not happy with what they perceive as a partial responsibility of fixing the sidewalks that are in front of their properties. 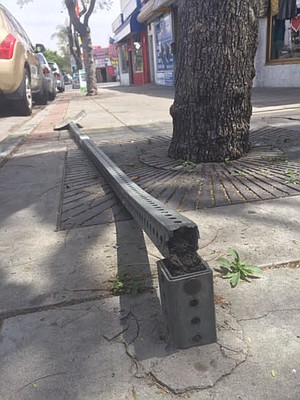 Some residents say that they have to split the expense with the city. Councilmember David Alvarez wants the City of San Diego to foot the bill 100%. Last month he proposed to “determine best how best to revise Council Policy 200-12, the Sidewalk Maintenance Policy.” 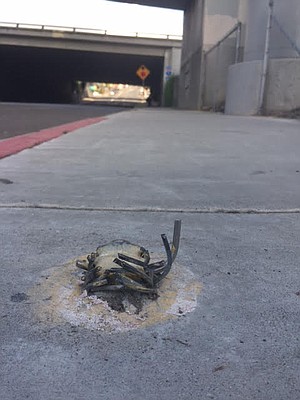 “All this talk about the sidewalks – they (the City of San Diego) should be taking responsibility for them,” John said, “that’s why the city got sued.” He was referring to a recent City Council approved settlement costing almost $5 million to a cyclist who was injured as a result of a tree-damaged sidewalk. The settlement was quoted by Alvarez when he proposed the sidewalk policy revision. 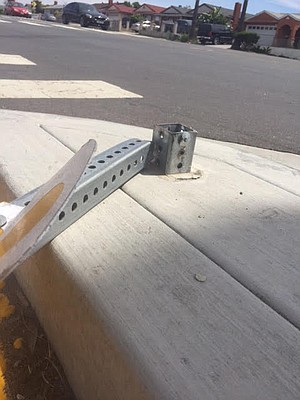 John said that he and his family paid “nada” for their sidewalk repair in 2014, despite accusations by their neighbors that their “big-ass tree” [roots] were the cause.

“… and then we got those (exposed metal sign bases) around here too,” John said. He was referring to two of them located on the corner of Palm and Twinning avenues (as of April 7). The two metal pieces do not appear as dangerous as the one by City College, but “still a hazard nonetheless.”

John is a hardcore cyclist that is able to get from his home which is south of Chula Vista (on the San Diego side) all the way to his friends’ house in Normal Heights “in about three hours.” John said that he’s noticed the new style of signage where they are slid and secured into a metal base, rather than cemented-in the pavement “like the old ones.” When the new style signs are removed (on purpose or by accident), the approximate 2″x2″ base remains, and sometimes the metal is sharp.

By John’s buddies’ pad on Adams Avenue, there is an exposed sign base on the opposite side of the post office. Two exits south (off of the I-15) in Cherokee Point there are two more on University Avenue, one by the Family Dollar store where John replenishes his electrolytes and another one a block to the west.

“That’s bad; it’s sharp,” said Fernando Lopez, the owner of Sabores Colombianos. He was referring to a broken 30-minute parking sign that’s been sitting on the sidewalk by his restaurant for two or so weeks. The toppled sign was still there (as of April 11) and Lopez is worried that his customers that park there to pick up their to-go orders, might trip or stub their toes on the sign base or the sign itself, “especially when it is [at] night.”

Up the way where Cherokee Point turns into North Park, on the Landis Street overpass (over the 805 freeway), there was a notoriously sharp-edged sign base that was exposed for a year or so.

“Our baby stroller would hit that all of the time,” said one resident who lived in the apartments around the bend.

A sign was finally installed atop the base, but the sharp edges below remained.

There was another sidewalk liability within walking distance from City College. On April 13, a City College student noticed what appeared to be remnants of a sign stand on the sidewalk next to the Grocery Outlet. “That’s dangerous, homie,” he said. The metal was sharp, but more so, the wires were still hanging about.

On April 14, an email inquiry (with photos attached) regarding the sidewalk sign bases and the questionable sidewalk remnants, were sent to the City of San Diego. As of press time, no response came. There is a portion of the website where citizens can report a broken street sign.

On Councilmember Alvarez’s memorandum he said, “The City’s policy concerning sidewalk maintenance is ineffective and has resulted in many sidewalks across San Diego remaining damaged and unsafe, which results in injuries to residents on a regular basis and the need to pay out high priced settlements for personal injury.”

Sharon said that her toe is OK, but admits that she needs to be more aware of her surroundings; especially when walking and texting. “I really don’t pay attention [to] where I’m stepping,” she said, “which I should [be].”

Thank you for this story. Clearly these hazards could kill someone.

But nothing will happen until they do.