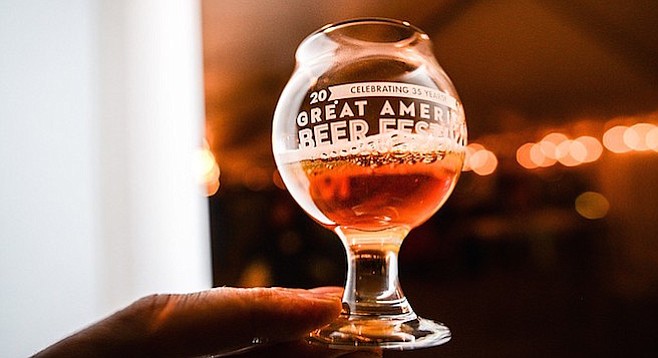 The competition keeps getting tougher, but San Diego beer keeps coming out a winner at the 2016 Great American Beer Festival. San Diego area breweries tallied 18 medals overall at the annual beer competition held in Denver each year, including 8 gold, 3 silver and 7 bronze.

Another top winner was Santee's BNS Brewing & Distilling Co., which followed up its enormous IPA gold medal from 2015 with two medals: a silver for Gatling Gun stout, and gold for Prospector red ale.

While brewer Jeff Bagby has won more gold medals at GABF than just about anyone, his Bagby Beer Co. earned its first, for its Sweet Ride Bohemian pilsner. Likewise, Marty Mendiola added to a hefty personal medal count but earned a first win for his new brewery, Second Chance Beer Company for its Tabula Rasa Toasted Porter.

Genuine first-time winners include Solana Beach's Culture Brewing with a gold medal brown; Duck Foot Brewing with a silver medal chili beer; and Pure Project, winning a bronze prior to its first anniversary with its Belgian sour, Roses Red.

To put San Diego's medal haul into perspective, its 18 medals and 8 golds bested another great beer city — breweries in the vicinity of Portland, Oregon, won 13 medals, including 2 golds. However, greater Denver area breweries (including the Boulder area) claimed 31 medals and 12 golds.

Ultimately, California beer continued to show well, earning 68 medals with 22 of them gold, including an Apricot Wheat by Wiens Brewing Co. in Temecula.