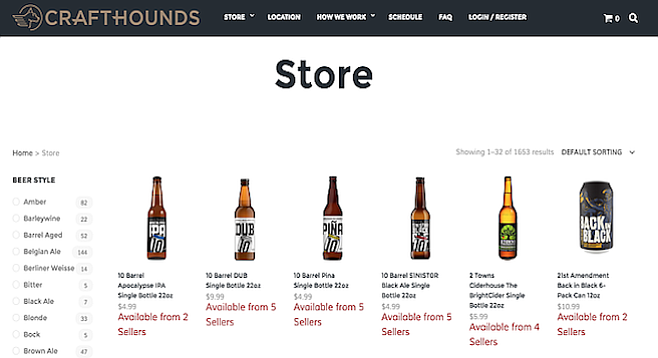 Some services pioneering growlers on demand

Web-based alcohol home delivery service has become a growing national phenomenon, with myriad businesses cropping up around the nation. Typically, a a company will pilot the service in a major market before spreading its brand into other cities. In October, a new such business launched in San Diego first, and it offers an appropriately local twist.

As CraftHounds cofounder Adam Gendler points out, "One of the things that separates us from other delivery services is we're solely focused on craft beers." Thus far, Gendler says CraftHounds has negotiated agreements with 26 different licensed alcohol vendors around greater San Diego, helping it offer anywhere from 400 to 2000 craft and import varieties, depending on customer location.

Since delivery services may only operate off the license of its vendors, establishing a reliable network is key to offering a combination of variety within a particular area's delivery radius. Most of the delivery services within San Diego primarily draw from the same handful of local shops, including Quality Market, KnB Wine Cellars, and Krisp's Best Damn Beer Shop.

The competition for the craft beer segment may be rising, though. After a trial run earlier this year, restaurant delivery service DoorDash has redoubled its efforts to feature alcohol delivery over the past four months. A rep for the company sees alcohol comprising as much as 5% of its total order volume.

While most of that demand stems from liquor-store purchases, Suter is working to develop relationships with California breweries. Hess Brewing currently sells growlers and cans, while Helm's Brewing offers bottles and full growlers on demand.

CraftHounds is also pursuing growlers on demand to customers within ten miles of a brewery or tasting room. 32 North has already signed on, and Gendler says he's in discussions with a dozen or so others. He notes CraftHound's 20 drivers are each equipped with coolers to ensure the fresh beer remains cold on delivery. While the cost of the growler is currently applied to such orders, the company is working to develop a growler-exchange protocol.

Despite the growler potential, craft beer still seems to fill just a niche segment of the overall delivery market. Boston-based web company Drizly brought it's alcohol delivery service to San Diego six months ago. Based on a sampling of its last 1000 orders, the company reports a nearly even split between beer, wine, and liquor sales through its service, with its top beer sellers representing macro brands: Bud Light and Corona Extra. It's top-seller overall thus far has been Tito's Vodka.

However, Drizly reports that San Diego–brewed beer comprised 21% of its beer sales thus far, which does compare favorably to craft beer's 12.2 percent share of the national beer market. That said, Drizly's top local seller is Constellation-owned Ballast Point, while the first brand to come up in CraftHound's default alphabetical listings is AB-InBev–owned 10 Barrel.