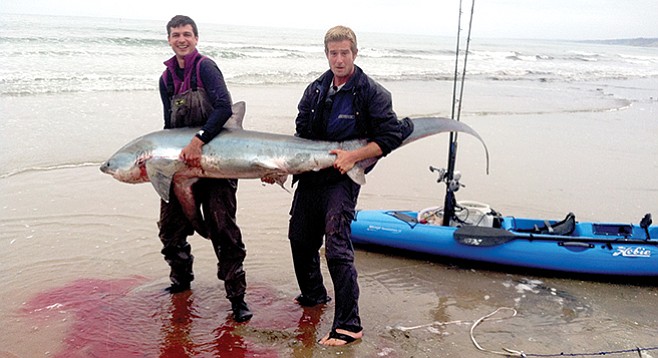 Kayakers hooted and hollered as large threshers took them on sleigh rides out to sea.

May the Fourth. International Star Wars day to some, but to La Jolla kayak fishermen, it will forever be the beginning of the Wide Open Thresher Bite of 2016.

The gray, windless day — with ample bait and a downhill current — felt like yellowtail, so I launched the kayak at a gentlemanly hour, and made greenbacks with ease. A few sport boats clustered beyond the northwest corner, and 15 or 20 kayakers had spread out along the outer kelp edge between the cove and Boomers when the thresher sharks came crashing through.

Just like that, everybody was hooking up. Kayakers hooted and hollered like kids at the fair as large threshers took them on sleigh rides out to sea. My first hookup chewed through the 40# fluorocarbon leader almost immediately, so I re-rigged a fresh 4/0 circle hook and headed toward a promising bait boil, still hoping for yellowtail.

The whole time, 100-plus-pound sharks were leaping clear of the water, shredding tackle, and making short work of the local mackerel population. You could see their tails slashing bait, and the the stoke level was high in the kayak lineup.

I never saw my second strike. The shark hit from underneath the boiling bait, and then just sat there. I wound as hard as I could to get over it, thinking I might be on a black sea bass because there was nothing but heavy weight. Then the fish ran 90 degrees to port, nearly overturning my boat, and the fight was on. I felt the distinctive pop of Spectra cutting kelp as the shark swam big circles through the submerged canopy. I was able to turn it by buttoning down the drag and high sticking the rod with everything I had. It took about half an hour to get it to color.

Most of the morning’s other hookups broke off, and when it became clear that I was going to land mine, a few other kayakers gathered around to cheer me on and help out where needed. Without Lucas, Chad, and Justin, I don’t know if I could have managed. This was my first thresher shark, and Chad, who had landed a few large sharks, talked me through it. 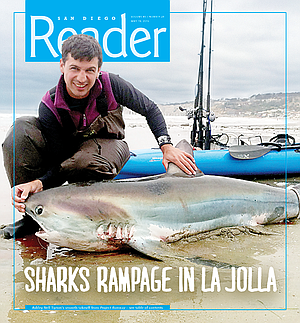 I wanted to release the shark, which I estimated at a hundred pounds, but it was nonresponsive by the time I got it to the boat. Cutting it loose would have risked wasting it, so I decided to keep it. Chad, Justin, and Lucas all agreed to split the meat, and, with Chad and Justin pulling with their Hobies and Lucas on guard duty, we towed the shark back to the Shores.

On the beach, we realized the shark was bigger than we’d thought. I couldn’t lift it myself. I never got it weighed because I knew I was in for a long day. I’m no trophy hunter, so a fair estimate of 150 pounds is good enough for me.

Ian Pike - you are a jackass. Threshers, like most large sharks, have a low fecundity rate which makes them vulnerable to overfishing. They are getting fished out. Threshers do not reach sexual maturity until sometime between age 7 and 13. You do not know whether this one reached sexual maturity and you killed it, so for sure it will not be making any more sharks. Jackass. There is no reason to kill one for fun, and no reason to kill one for sport now when they are in danger of getting wiped out.

RookBeyer, your insult was uncalled for.

Here's some knowledge for you, straight from the Current California Ocean Recreational Fishing Regulations website. (https://www.wildlife.ca.gov/Fishing/Ocean/Regulations/Fishing-Map/Central)

Open year-round, except that white sharks (Carcharodon carcharias) may not be taken or possessed at any time. The bag limits for sixgill shark (Hexanchus griseus) and sevengill shark (PDF) (Notorynchus cepedianus) allow take of one fish per day with no size limit. The bag limits for shortfin mako shark (Isurus oxyrinchus), thresher shark (Alopias vulpinus), and blue shark (Prionace glauca) allow take of two fish per day with no size limit.

RookBeyer, your insult was uncalled for.

Here's some knowledge for you, straight from the Current California Ocean Recreational Fishing Regulations website. (https://www.wildlife.ca.gov/Fishing/Ocean/Regulations/Fishing-Map/Central)

Open year-round, except that white sharks (Carcharodon carcharias) may not be taken or possessed at any time. The bag limits for sixgill shark (Hexanchus griseus) and sevengill shark (PDF) (Notorynchus cepedianus) allow take of one fish per day with no size limit. The bag limits for shortfin mako shark (Isurus oxyrinchus), thresher shark (Alopias vulpinus), and blue shark (Prionace glauca) allow take of two fish per day with no size limit.

Fighting and trying to land a 100+ pound thresher from a kayak is macho foolishness. Worse is killing the thresher just because it happens to cross your path when it is a species that has been overfished. It is a jackass move.

In April this year, the NOAA reported on a study done in response to a request from the common thresher and the bigeye thresher should be put on the endangered species list because of clearly documented overfishing in the past. The NOAA said that the threshers are currently at a low risk of extinction, although the data is not completely reliable.

Ian killed a thresher that was not old enough or big enough to reproduce. Threshers have a history of being overfished and the NOAA has been requested to include them on the endangered species list. Ian killed this one just because he thought it would be fun to hook and fight a 100+ pound thresher from a kayak. That is a jackass thing to do.

It's almost like you didn't even read the story!

You just can not stop yourselves can you ? Knee jerk liberals adding your slant, ideology to an article you saw a pic of a bleeding shark, you don't read the article, you attack first, and think never. This was a great story, that ended with friends with food to spare, you people and your judgments... Lets turn that back on you. Go on vote for Hillary, who supports the forcefully integration of people, who hate America, force their religion on others, as they mutilate the genitals of children and women and stone gays to death, while plotting the death of you and I and the culture that gave you the freedom to be such a douche.

I'm a liberal, right? I care about the environment, I respect life and nature, and I legally take fish. The anglers, for the most part, are conservationists that are concerned about the health of the fishery. The headline, by the way, is just fishing nomenclature; it means "they're going off". It does not mean, to any angler in the know, that the sharks are angrily running amuck. How can folks be so daft?

As long as studies show that taking a thresher is not harmful to their overall existence and they are not protected, they will be fished.

It is not all that dangerous if you know what you are doing. As the author said, it had 'rolled' by the time he got it to the yak. Though I do not intentionally fish for them, they can be by-catch. If they roll, it is hard to revive them. Better to keep the meat than waste the fish. Better to get them in and remove the hook if releasing them.

I suppose there will always be those that like to scream about stuff. Especially when we've turned politics into something akin to a WWF cage-match and laud idiots with no clue of reality while we 'rampage' on every 'misleading' headline.

As I said, anglers support the research that protects the fisheries. How many folks cried when researchers asked anglers for white seabass heads? Here is a part of a flyer by a researcher concerning thresher sharks to anglers and how we, as stewards of the environment, can help.

"In the search for thresher sharks - Laura M. Steele

Young common thresher and salmon sharks have been stranding throughout the beaches of the West Coast due to a bacterial brain infection. The Shark Lab at CSULB is looking for healthy thresher and salmon sharks to study where this bacteria is coming from and how it’s getting into their brain. For that we need to sample: • Brain, inner ear, liver and spiral valve • Embryos from pregnant female thresher and salmon sharks We need the help of anglers who are willing to let us sample their catches. If you would like to collaborate we will meet you at your convenience and dispose of the shark’s remains. We will also clean and send you the jaws in sign of appreciation! Thanks for your collaboration! I am looking for brain and inner ear, so if the whole head can be preserved that would be great. Also the spiral valve (the last part of the intestine), if you are able to put this organ in a bag so the content doesn’t spill, great! Lastly, we need a chunk of the liver. All this can be put in a bag and frozen until I can come get it."