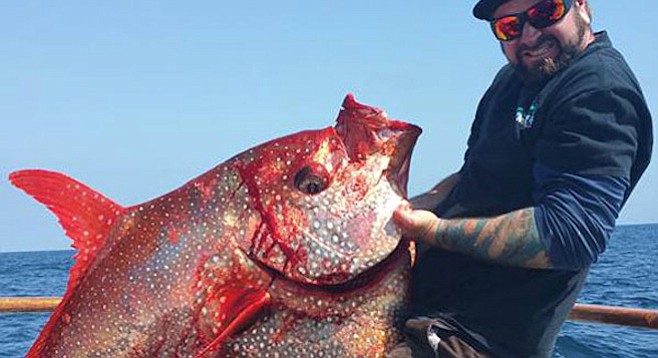 First opah landing of the year

Inshore: With the majority of the fleet looking for yellowtail and bluefin in the top of the water column, the calico and sand bass counts dropped off a bit. Still, those ½-day and ¾-day trips targeting structure and the kelp edges are doing very well on bass, rockfish, sheephead and even a few yellowtail, lingcod, and halibut. The private boaters and kayakers are still doing well, especially off La Jolla, on yellowtail and occasional thresher sharks. 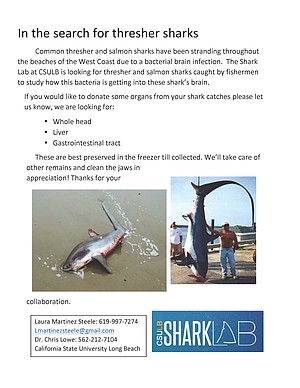 Remember, if you get a thresher, to donate the brain, inner ear, liver and spiral valve as well as embryos from pregnant female thresher and salmon sharks. CSUSB’s Shark Lab needs the parts for a study of a bacterial infection that some threshers and salmon sharks have in their brains. 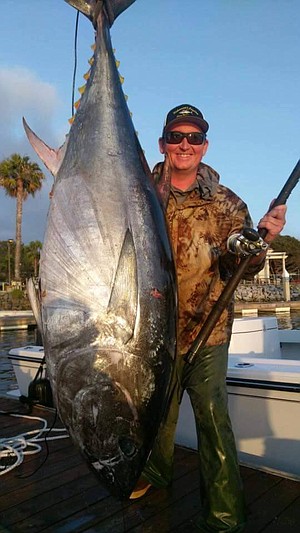 Outside: Big bluefin tuna is what’s up out there from the 9 Mile Bank south for everything from ¾ day to 1.5 day or longer trips. These breezing schools of fish are holding some units up to nearly 300 pounds and are offering anglers a chance of a lifetime; to hook and land a 200-plus pound tuna north of the border.

I believe the first opah of the year hit the deck and few yellowfin made the count as well as this summer season on the back of two incredible seasons kicks off with a splash. By the time this extended El Niño ebbs into the predicted La Niña in the fall, I believe we will have a lot more remarkable catches to talk about in the San Diego sportfishing community. So get out there and ‘start a conversation’ with a once in a lifetime catch as San Diego is the home of world’s most productive and largest live-bait sportfishing fleet.

Hook and handed off 3 bft today. We landed two. Both cows. Both on the popper. #205 #207. By far the best overnight trip I've ran @pacificqueensportfishing

Notable: Speaking of bluefin tuna, these fish right now are a bit sketchy when the boats are near. It becomes “run and gun” type fishing, kind of like the spring yellowtail as they transition up in the water column. It’s about spotting the boils and running to the spot without running over or spooking the fish. For this type fishing you need to have the art of the jig-stick down and you need to get the lure in front of the fish. Usually this requires a lot of practice, an 8’ to 10’ rod, 40 pound test monofilament line and a surface iron or popper you can cast up to 70 yards or more. Any proven 5 or 6 to 1 reel will work, but for these brutes you’d better go with a 2-speed, because without the low gear range some of these fish have pinned anglers to the rail for over four hours!

Whew, that's a relief. A quick scan of the headline made me think Oprah is coming to town with one of her seminars (to make her even richer). 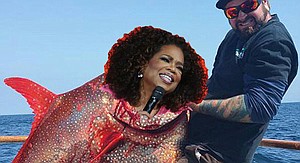 I guess it WAS Oprah (not an opah)!

Going to be an interesting year on the water. I work downtown and frequently jog by the bay. Today I saw tuna crabs swimming between the boats tied up at the foot of Hawthorne Street, just south of the Coast Guard Station on Harbor Drive. Been jogging there for 19 years and have never seen that before.