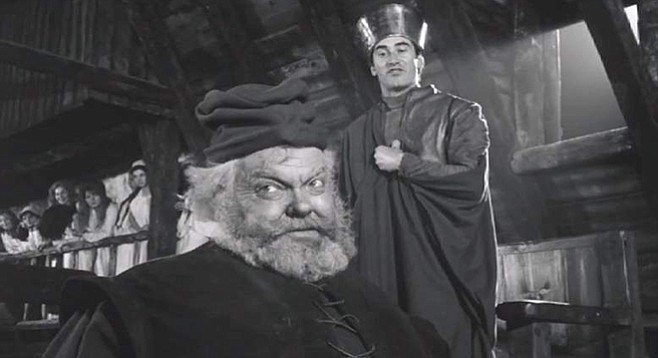 A week of revivals at the Ken, April 1–7

To call Chimes at Midnight (aka Falstaff) Orson Welles’s crowning achievement is tantamount to naming it the greatest movie ever made.

The film never found a home on DVD — there’s a dupe pressing in circulation — making it next to impossible to see since its release in 1965. It’s been over 40 years since I saw the film in its entirety. I had access to a 16mm dupe with a muddled soundtrack, characteristic of every pressing. Years before home video became the main mode of exhibition, the chances of seeing the film again anytime soon weren’t promising. I spent a Sunday watching it three times and have been pining for another viewing ever since. 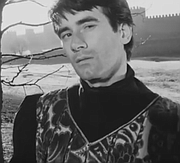 There’s a copy in my DVD library, but I can’t bring myself to watch a bootleg of a film that can’t possibly exist anywhere but on a giant theater screen. Thanks to Landmark’s Week of Film Classics at the Ken, we’ll all have a chance to see the film projected in its restored glory.

Landmark was kind enough to forward a screener of Chimes. The ten minutes I watched on television looked like 3D compared to every pressing that’s come before. And for once I wasn’t straining to hear the dialog. You will not see anything in a theater this year (or for many years to come) that will rival the magnitude of this picture. Don’t miss it!

It must have been excruciating for a genius like Welles to practice his craft, when Hollywood for the most part didn't appreciate him or his work. And to have him end up getting paid for appearing on Dean Martin's celebrity roasts on TV was sad. If you never saw "The Trial" (1962) starring Anthony Perkins, then try to find it. It's one of Welles' best. I was lucky enough to see it at a theater when it came out.

And playing second fiddle to Merv Griffin or lending his wonderful voice, even at an advanced age, to a docu-ganda adaptation of dispensationalist fanatic Hal Lindsey's THE LATE GREAT PLANET EARTH, just to draw a paycheck!

With this week's developments on the FBI-Apple i phone conflict, this line has NEVER been more prescient. Orson Welles, pioneer filmmaker, social prophet.

Fellas, you force my hand. "Ma, haaa, the Freeeeench chammm...pagne!"

Yeah, and that couple, they seem catatonic!!!

I can imagine that he's thinking: "Jeez, can we get this #)%[email protected]^ spot done, so I can get my ~&(*) check? And I've drunk better pee than this so-called Champagne."

Sparse in means, rich in artistry. It was a tremendously fine if strange event Sunday, to see Chimes shown at last again, nearest how it was meant to be seen. Near enough, but funny to hear a member for the small audience remark how many showed up. How few, how few know how to be truly entertained anymore...

Welles was never really in step with what most audiences or the hacks in charge wanted at the time. Even when promoting peas:

Welles: Why? That doesn't make any sense. Sorry. There's no known way of saying an English sentence in which you begin a sentence with "in" and emphasize it. Get me a jury and show me how you can say "in July" and I'll ... go down on you. That's just idiotic, if you'll forgive me by saying so."

Uneasy lies the head that knows of a remote farm in Lincolnshire. 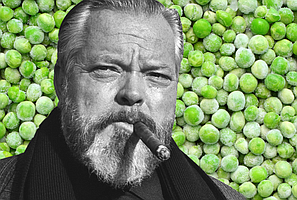 You're such pests! I took in the 2pm show. There were more people in attendance than I'd seen at The Ken in years. If ever a film demanded the big screen treatment, it's this one. The first shots of Falstaff – those tight, fisheye closeups – hog the frame in every way. Throughout the course of the film, Welles gradually pulls back until this giant of a man is but a dot on the horizon. I wish the Angelika would give it an extended run. I'd love to see it again.

This was actually released as a single in 1984: 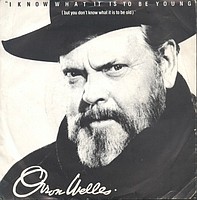 This was on the flip-side.

There's a superb film to see if you've never seen it: A Man for All Seasons (1966). It won a ton of awards, including six Oscars. Welles had a supporting role, Cardinal Wolsey. When he's onscreen, he's Welles at full blast. Rent or buy it!