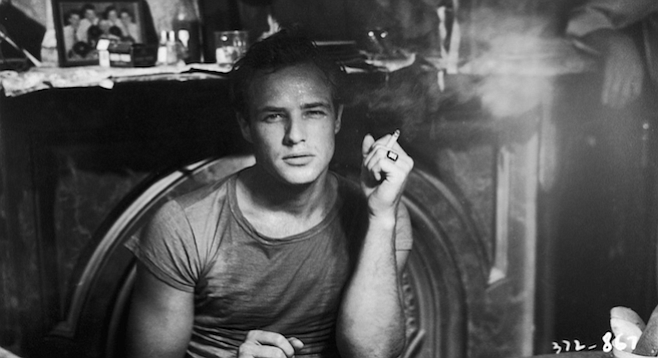 A week of classics at the Ken

Far be it from me to deride any exhibition chain that’s okay with showcasing repertoire fare a few weeks out of the year, but have we not heard the chimes at midnight? The last time the Ken presented a week of classics it sounded the revival of Orson Welles’s heretofore impossible to see Chimes. The Sunday matinee drew more people than I’ve seen in the auditorium since who knows when.

This month marks a return to business as usual, i.e., booking pre-sold titles including three plucked off the dreaded AFI Top 100 list. First off, four of the seven titles are in my DVD library and it’s certain that fellow collectors (with less discerning taste) own the set. Other than Raiders (once was too much), what cinephile worth their salt has not made repeat pilgrimages to every one of the titles on the list?

The Angelika has screened enough Spielberg films in their monthly Movies off the Wall series to make my head explode, but to their credit, the series has also offered such rarities at King Vidor’s silent The Big Parade and the four-hour roadshow version of Joe Mankiewicz’s Cleopatra.

Next time how’s about including one picture out of the seven — say Nick Ray’s Johnny Guitar or George Cukor’s Holiday — that’s a bit off the beaten path? Is that asking too much? One title to prove there’s more to life than the dictates of the staid American Film Institute?

July 15: David Lynch’s Blue Velvet. One can never get enough. Go and be sure to bring a date.

July 16: Steve Spielberg’s Raiders of the Lost Ark. While Scorsese was busy smuggling Powell & Pressburger references into his films, Steve & Georgie were happily emulating the lead-footed Republic serials they were weaned on in this climax-laden helping of childish slop. The film that taught me to hate, it will forever be my least favorite nugget of Shitberg offal.

July 17: William Wyler’s Funny Girl. Look on the bright side. They could have substituted Bab’s remake of A Star Is Born and no one would have been any the wiser.

July 18: Elia Kazan’s A Streetcar Named Desire. With a newly restored DCP of One-Eyed Jacks making the rounds — the public domain Brando western has yet to receive a proper DVD presentation — do we really need another visit to Belle Reve?

July 20: Blake Edwards’s Breakfast at Tiffany’s. Though it may come as a shock to Landmark bookers, Audrey Hepburn actually appeared in movies other than Breakfast at Tiffany’s. Why not spread a little more enchantment by screening Billy Wilder’s Sabrina or Love in the Afternoon, or, dare I say, Peter Bogdanovich’s sparkling They All Laughed?

July 21: John Huston’s The Maltese Falcon. Never saw it, but word on the street is it’s okay.

200% on Speilberg. (Are the midnight showings of RAIDERS not enough???) And yes, calling it a "week of classics" is definitely suspect, especially when you have VALLEY OF THE DOLLS. I enjoyed the big screen, but "classic" it is not.

Hey! Leave "Dolls" alone! It's one of the greatest comedies ever made. If only Mark Robson had been in on the joke.

I would like to see Full Metal Jacket on the big screen.

I can see it happening. They showed quite a few Kubrick films during the "A Week of Classics" series as well as the Midnight series. Clockwork Orange, Barry London, The Shining, 2001 A Space Odyssey, Dr. Strangelove.

If they do another week of classic series, and the do it around the holidays, maybe they can show Planes Trains and Automobiles. (fingers crossed) wishful thinking I know, but maybe.............

You should have quit while you were ahead.

I don't know what your talking about, that movie is awesome :p lol.

If they are showing Raiders of the Lost Ark, they can surely show Planes Trains and Automobiles.

Full Metal Jacket, Plan Nine from Outer Space, Planes Trains and Automobiles, One Flew Over to Cuckoos Nest, King of Comedy, Seven Samurai, Harold and Maude, My suggestion for the next "A Week of Classics" series.

That's close but the actual title is: One Flew Over the Cuckoo's Nest

Typo sorry. But you have to agree thats a good suggestion, no?

You know this, but today's moviegoers might not. Kirk Douglas starred in the Broadway play, and he bought the movie rights. He was never able to get the film made, so gave son Michael the go-ahead to produce it (along with Fantasy Records owner Saul Zaentz). It was a low-budget film, and became a hit. It won an Oscar in '76 for Best Movie. That's how it's done!

De Niro's amazing performance in The King of Comedy totally creeped me out. The movie made me feel very uncomfortable. De Niro reached way down somewhere to bring out that edgy character, Rupert Pupkin, created by screenwriter Paul Zimmerman. For those who haven't seen this film, be forewarned that it's not a comedy. Jerry Lewis is also excellent.

Easily one of my favorite Martin Scorsese and Robert De Niro movies.

Ok thats enough for one day.

Cleopatra, despite Liz being too old/too white, was a pretty good movie. I give it a B+ rating. The supporting cast was outstanding, mostly good script, and it held my interest. I saw it in 1963 at the magnificent Rivoli Theatre [long gone] in NYC.

Where were you earlier this year when the Angelika screened the 4K restoration? It all turns to crap after Harrison is killed off and replaced by that stinkin' slab of Welsh ham, but damn if Leon Shamroy's lighting isn't stunning to look at.

But you must have liked Roddy McDowall as Octavian, right?

Last night I read an old Vanity Fair article about the making of Cleopatra. The process was even worse than people knew. It was the most expensive movie ever made at the time, reportedly $44 million! In today's dollars, they said it would possibly equate to $300 million. It almost bankrupted Fox, and caused a total shakeup in their management. Fox had to sell off their huge backlot (which later became Century City) to survive. The movie, after years, finally did eke out some profit but not much. The film's producer (Walter Wanger) never worked again. Director Joseph Mankiewicz was devastated from making the film, and didn't do much afterward, as the critics slammed the movie. He didn't get "final cut" as Fox finally took control of the film, and let him go.

The 2 disc DVD comes complete with an indispensable feature length episode of "AMC's Backstory" on the making and subsequent breaking of the picture. It's at times more fascinating than the finished product.

It's amazing what stupid decisions are made by movie studios, by what they greenlight. And they still do it. "The Lone Ranger" and "John Carter" come to mind, and there have been many more big-budget bombs. I'm sure you know all of them, Scott.

Know them? I've lived them! For some odd reason, I've always been drawn to big budget flops. "1941" is the only one of his pictures in my collection. "Strange Days" and "V for Vendetta" should have hit much bigger than they did. And I'm even kinda' partial to "John Carter" and "World War Z." It's the comic book opiate of putting effects ahead of storytelling that frosts my keester.

A frozen tush is definitely not a party in your pants.

Blue Velvet was a lot of fun. Pretty decent size crowd, at least 100 people in attendance. Only minor complaint was that it wasn't in 35 mm. Not that they were advertising it would be shown in 35 mm, but it would have made the experience a little better. Just a minor nitpick. Anyways......