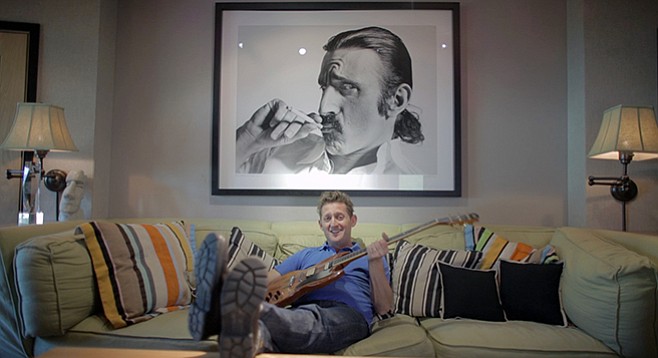 The man who played Bill in Bill and Ted’s Excellent Adventure hopes his next excellent adventure involves Frank Zappa.

Actor/filmmaker Alex Winter is currently running a Kickstarter campaign that, if successful, will raise $500,000 to preserve key parts of Zappa’s artistic creations, including music, video, and art.

“That’s enough to preserve the stuff that needs immediate preservation,” Winter said. “It’s a monumental task considering [the Zappa family trust] is basically a mom-and-pop shop. I need to archive stuff like interviews, but the film’s deteriorating quickly.”

If Winter can raise $500,000 by April 8, he will spend the next year preserving crucial parts of Zappa’s “vault,” a large room in the rock legend’s home in the Hollywood Hills. If he can raise more money, he hopes to use the material in the “vault” to make the first official Zappa documentary.

“Zappa was an autodidact and a prodigy, an accomplished composer at a young age,” Winter said. “He and his wife, Gail, kept everything, so there is a large amount of stuff from his early days in San Diego.”

Zappa moved to San Diego in 1954 and attended both Grossmont and Mission Bay High Schools. Winter expects his proposed documentary would definitely touch on his years in the area.

Winter can’t predict how much attention will be paid to Zappa’s San Diego years but says the area is crucial to Zappa’s growth as a musician. Among other things, he discovered the music of avant-garde musician Edgar Varese at Alan’s Music Store in La Mesa.

It looks as if Winter will reach his goal with ease. A week after the campaign started, more than $376,000 had been raised.

The more money is raised, the quicker Winter can move from preservation into making the film.

“I’m happy with the results, but we need larger backers — but we’ve offered great rewards,” he said.

For $6000, Winter and Zappa’s son, Ahmet, will give a private tour of the “vault,” including a chance to hear rare and unreleased material, while $7500 gets a recording session at Zappa’s private studio and a chance to play one of his guitars.

However, Winter is holding out for a rich Zappa fan willing to pony up $9 million. That person will get a producing credit and all of the other available goodies, and also Zappa’s Hollywood Hills home, minus the material in the vault.