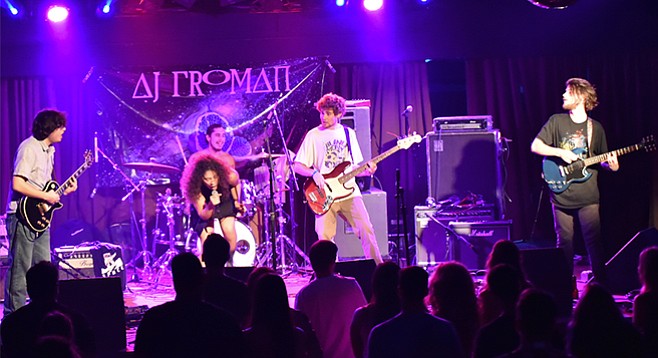 This year marks the 50th anniversary of Freak Out!, the first of some 60 Frank Zappa albums. Last weekend a new documentary called Eat That Question: Frank Zappa in His Own Words was released to select theaters. The film features the life of the revolutionary rocker who died of cancer in 1993 at age 52.

If there was one local band who could benefit from a renewed interest in Zappa’s offbeat musical legacy, it might be AJ Froman, the five-member psychedelic group that shares Zappa’s progressive, edgy musical DNA.

“If all that stuff would raise awareness about him, that would be amazing,” says John Joyce, who founded AJ Froman with fellow guitarist Albert Bowman three years ago.

But he isn’t betting that Zappa-mania or Froman-mania is in the cards.

“San Diego is more of a reggae town,” Joyce says. “We’re just trying to figure out where we fit in and who’s digging it...”

The two founders met four years ago when they attended all three days of a String Cheese Incident concert at Red Rocks in Boulder.

They met AJ Froman lead singer Sarah Norwood at their favorite neighborhood hangout, O.B.’s sushi and tapas restaurant the Joint. “We were planning on just being [an] instrumental [act]. She was the only person we tried out. Everyone was thrilled.”

I wonder when they play their hometown bar Winstons, if the Deadheads who expect their familiar jams can’t abide AJ Froman’s edgier, more stimulating groves.

“That’s a good question,” says Joyce. “Our dark, aggressive side definitely comes out more than our sweet side. We don’t cater to any specific crowd. There are so many sounds from the past 50 years. We’re fast-paced progressive rock. We love King Crimson.”

AJ Froman, which also includes guitarist Jeff Shaefer and drummer William Hart, appears July 8 at the Moustache Bar in Tijuana with Idlehands and the Hand of Gravilo; and on July 14 at the Soda Bar with Idlehands and Dani Bell and the Tarantist.