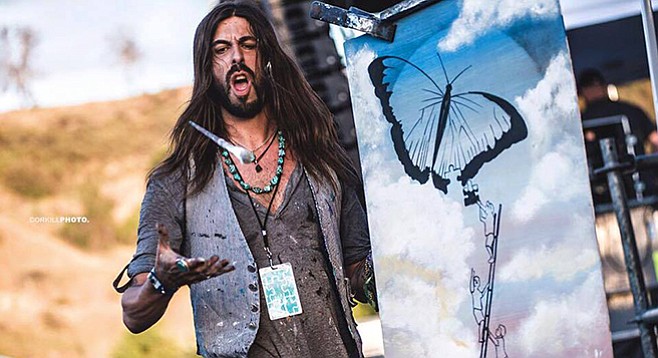 Most jobs associated with concerts have been around for years — musician, roadie, sound tech, merch guy. Jimmy Ovadia created a new job description, and he says it’s been his primary means of support for three years.

Ovadia paints freestyle on a plywood sheet or canvas onstage while the band plays.

...painting onstage beside the Mike Pinto band as they perform

“I’ll change the imagery during the show,” says Ovadio who has been known to paint a surreal tree with branches that resemble a face or an instrument. “I like to stay connected with the music. When I painted for Matisyahu, I painted one image for each song. I’m known as the guy who flips his brushes. A lot of energy and hair going on.”

Ovadia started in “rock art” ten years ago. He did the LP sleeve for Louis XIV’s Slick Dogs and Ponies and posters and flyers for local bands Midnight Rivals, Transfer, and Silent Comedy.

“About the time I got a divorce, I was looking for a change of pace,” says Ovadia. “I wanted to test myself and see what I was capable of. It just seemed right to try painting with live music. I started at indie-band shows at Soda Bar, Bar Eleven, and Bar Pink.”

That led to doing festivals like California Roots in Monterey. “From there I went out on tour with Rebelution and Slightly Stoopid...when you go on tour they don’t always have room in the van, but they try and do everything they can to help you.”

He says his one-of-a-kind concert mementos usually sell themselves.

“I usually sell it right off the stage after the show. I try to get it signed by the band to mark the moment. I try to start at $350. I found I didn’t need a gallery to push my art.”

Ovadia drew the attention of the producers of Fresh Paint/Skin Wars, an hour-long TV show hosted by Ru Paul that airs every Wednesday at 8 p.m. on GSN. Nine artists paint naked subjects. The winning artist each episode gets $10,000.

“They chose artists who had never done body paint before. All the models I got were women. They have a panel of elite artists who judge you like American Idol.” Ovadia says he is forbidden to say if he won or not. “They haven’t run my episode yet. It should run in the next month or two.”

That is so cool. I've always loved the idea of painting music. I love this so much!