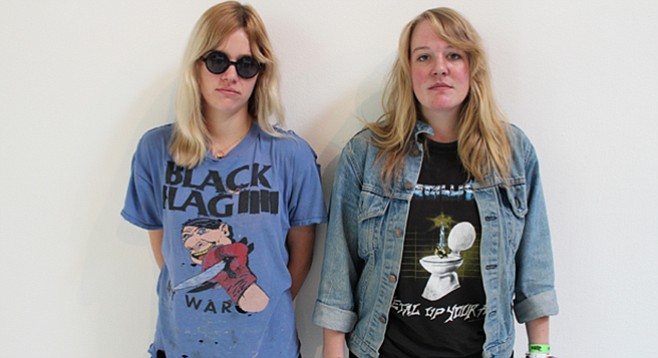 Jennifer Clavin of Bleached was sitting in a park in her hometown of Los Angeles when a couple handed her a cut-and-paste religious pamphlet.

“In it there was a collage they had made of all these words and images, and one of them said ‘Welcome the worms,’” Clavin says. “I just was, like, ‘Oh, my God,’ because we were so deep in the record and I was, like, ‘This is what we should call the album!’ To me it was just saying, ‘Welcome the worms of life. Welcome to that darkness.’”

"Keep On Keepin' On"

...off of the new Bleached record, Welcome the Worms

To Clavin it seemed to be the perfect title of an album that chronicled a rough patch she and her bandmate (and sister) Jessie Clavin went through during their two-year hiatus. Welcome the Worms is described by the garage rockers as being darker than their 2013 debut, Ride Your Heart, and their first band, Mika Miko, their punk band that disbanded in 2010. The Clavins say the ominous sound was enhanced by a new producer and newfound confidence. “Just being able to play what we want to play and lyrically saying what I want to say,” says Jennifer of feeling more comfortable writing uncomfortable lyrics. “With the last album it was easy because I was talking about relationships...a lot of people relate. On this record I have the confidence to really dig into myself...the dark side of my life.”

Bleached and No Parents

Bleached decided to work with producer Joe Chiccarelli because he promised to create a dark sound to match the dark content. “[Chiccarelli] said that when people put on this record it would sound really scary,” says Jessie. “Me and Jen were, like, ‘Yes, we really want you to produce this record!’ I think working with a new team of people helped us create a sound that we had envisioned but didn’t know how to bring it out.”

Bleached comes to San Diego March 30 to play the Casbah with L.A. punk band band No Parents. Welcome the Worms comes out on April 1.

Excellent preview, this sounds like a band and a show well worth catching! Also nice to see a new contribution from Lara McCaffrey, whose Blurt reports are always solid and informative.

Thank you, Jay! Thanks for reading!

Note from the author: Bleached had to reschedule their San Diego show with No Parents to May 12th. This week we received an email from their PR team saying: "Just wanted to give you a heads up that Bleached are unfortunately having to cancel their show last minute in San Diego."