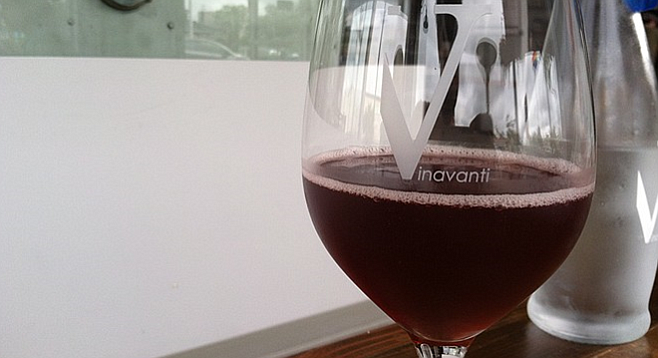 It can cleanse fish-and-chips with just one sip

Vinavanti Urban Winery’s tasting notes for their BPN get it mostly right. The quirky, pseudo blanc de noirs do indeed taste of raw cranberries and just-ripe raspberries. They fail to mention the green apple tint, but it’s there, no doubt courtesy of some malic acid. Calling the unexpectedly bright pink cup of bubbles “crisp and refreshingly dry” understates the wine’s character by a lot. This is a wine of such tartness that it could cleanse an entire fish-and-chips dinner off one’s palate with just one sip.

One thing it isn’t is common. What wine could be analogous to this? Beyond that, it is a somewhat simple creation, more like cider than wine and wildly overpriced at $13 for a glass and $45 for a bottle. A wine like this deserves to be sold as the summertime picnic beverage it is, purchased for less than $15 and enjoyed plentifully among friends. Considering the economy of scale at which Vinavanti operates, it’s unlikely that could happen.

Vinavanti bills itself as “natural,” a word which, though ambiguous, could not possibly imply anything bad, right? This is going to sound like a complaint. It’s not meant as one, but most people are going to take it that way: Only in America, particularly in California, and most especially in Southern California, could a winery get away with bragging that they neither fine- nor barrel-age their wine.

The implication is that certain parts of the “conventional” winemaking process defy nature, but let’s look at that claim. The big three fining agents — bentonite clay, egg whites, and isinglass — are all made from animals or dug up out of the ground. What’s unnatural about cracking an egg? The oak trees for making wine barrels evolved by a more natural process than Vinavanti’s plastic vats.

Vinavanti’s claims amount to nothing more than nonsense salesmanship, and that says nothing about the quality of their wine. But we are 21st-century Americans who have been sold the sizzle in lieu of the steak for 80 years and counting, and we gobble up cheeky buzzwords and spin without a second thought. Would that Vinavanti could simply make wine and have it be judged by its unusual qualities alone. Shame on us for forcing them to qualify wine, which is perfectly able to speak for itself if people would only listen.

Vinavanti spent a small fortune fixing up that former dump of a building, that previously housed a V-Outlet dollar-plus store (which got exposed by a TV station for illegally selling crack pipes from under the counter). So it's great to see a new business there, but Vinavanti's prices have to be high just to break even.