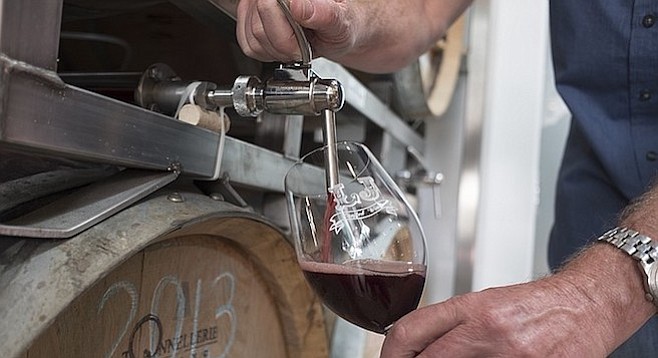 Napa wine, straight from the barrel

A couple of years ago, while researching San Diego urban wineries, I interviewed Lowell Jooste. He’d moved here a while back from South Africa, where his family has been in the wine business for four generations. He also worked with some heavy-hitter winemakers in Napa back in the ’80s, meaning he knows exactly where to find great Northern California grapes. 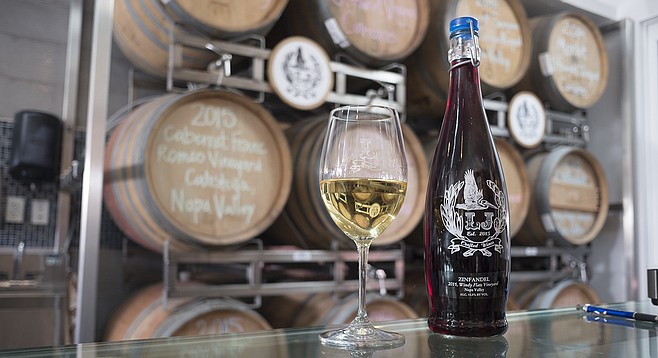 At the time we spoke, Jooste had been planning to open an urban winery in La Jolla using Napa and Sonoma county fruit but had run into a delay — a 6.0 magnitude earthquake that destroyed most of his barrels.

That was of course a tragic event, made even more so now that one of the few wines to survive the quake, a 2013 Patient Terrier Vineyard pinot noir, recently won double gold at one of the world’s largest wine competitions.

Jooste opened LJ Crafted Wines last year in Bird Rock, and when I heard about the award I figured I was due to check the place out. I found an airy tasting room with outdoor seating and a large, open window giving counter seats a view of the sidewalk. Inside, the walls are stylishly decorated with staves from the barrels destroyed in the quake, their metal hoops twisted into light fixtures hanging over the bar. Overall the place boasts a comfortable, beachy vibe, and I detected very little wine snobbery afoot.

However, what makes the place unique as a wine bar is a relative lack of bottles. Those surviving 2013 wines were bottled, including that double gold pinot, which the house sommelier described as tasting of cherry cola with light spice and good acidity. However, everything that LJ’s accomplished winemaker Alison Green-Doran has produced since remains in barrels, which sit on racks behind the bar.

Appellations cover highly regarded vineyards in regions such as Carneros, Russian River, and Alexander Valley and range from the usual chardonnays, rosés, and zinfandels to less ubiquitous grenache, albariño, and cabernet franc varietals. These are some of the finest wines I’ve tried in San Diego, and when you order a glass — for $8 to $15 — it’s poured directly from the barrel.

But there’s a reason we don’t see wine poured from barrels all the time: oxidation. It’s the same thing that will spoil your wine after you uncork a bottle, except that when you pour from a barrel you risk oxidizing 60 gallons at a time.

To counter this, Jooste invented a patent-pending system that pumps inert gas into the barrel as it pours, allowing no oxygen to seep in. You’ve see the same principle at work if you’ve ever ordered a growler fill of Modern Times beer — the brewery floods a glass container with gas so when the beer goes in no oxygen touches it, and it stays fresh in your fridge longer.

In fact, LJ Crafted Wines does the same thing to fill its own growlers with wine. A $6 growler may be filled and refilled from the barrel for $24 to $44, depending on the vintage. That’s a full liter, not 750 ml, though it’s not something you can tuck away for a special occasion. Properly stored, it’ll keep for one to three weeks. Not that I’m one to let a quality beverage last all that long.