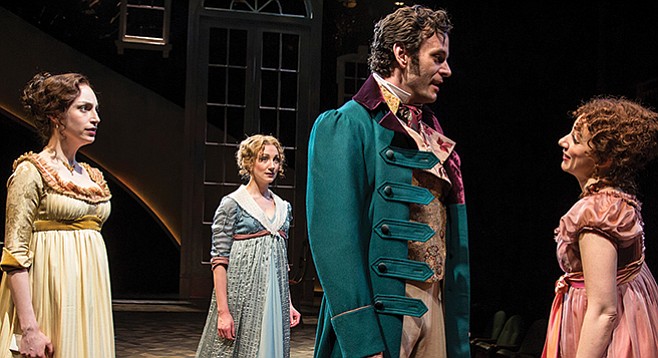 Most of the jokes in Sense and Sensibility are pretty subtle....

It’s not every day that a musical adaptation of English Regency drama comes chock full of hipster jokes. But, Paul Gordon’s Sense and Sensibility at the Old Globe, directed by Barbara Gaines, made me stop for a moment to wonder how sensibilities common to the 2010s could be so at home in the 1790s. Rather than seeming out of place, the occasional, and curiously modern, moments managed to fit right in.

Admittedly, most of the jokes are pretty subtle, like Marianne Dashwood (Megan McGinnis), who sounds more than a little Portlandia when she chides the cheeky rake Willoughby (Peter Saide) for reading Keats before lunch, on the assumption that “Ode on a Grecian Urn” is just too darn heavy for the morning. Marianne didn’t just like Keats before he was cool...she liked him 20 years before he ever published that particular poem. If I were the kind of person who takes theater selfies, I would hashtag that #anachronism.

Actually, if I were an active taker of theater selfies, I probably wouldn’t have noticed, so...moving on!

The character whom it would be easiest to mistake for a 21st-century hipster is Edward Ferrars (Wayne Alan Wilcox). Tailcoats aside, the young gentleman prefers the vague pronouncement of “seeking his own happiness” to any career — professional or military. He trusts that a generous inheritance from his parents will help him pursue his nebulous life goals, and if ever cut off, he would happily pursue a living in some obscure parish nobody has ever heard of before.

Ferrars describes his love for Elinor Dashwood (Sharon Rietkerk) using veiled metaphors from 20th-century pop music not once, but twice! The first time, he evokes the Proclaimers by saying he “would walk a thousand miles” for Elinor, and he later describes a metaphorical unravelling of his sweater through the pulling of a single, errant thread. We’ve all heard that one before.

But, best of all, near the end of the play, Ferrars actually introduces a piece of earthshattering news as if it were perfectly obvious to all present, then bashfully apologizes with, “Oh, I guess you hadn’t heard about that yet.”

Since when is the restaurant guy reviewing theater?

All the restaurants are too damn the same. One can only write so much about Brussels sprouts laced with some kind of pork product before it's time to diversify.