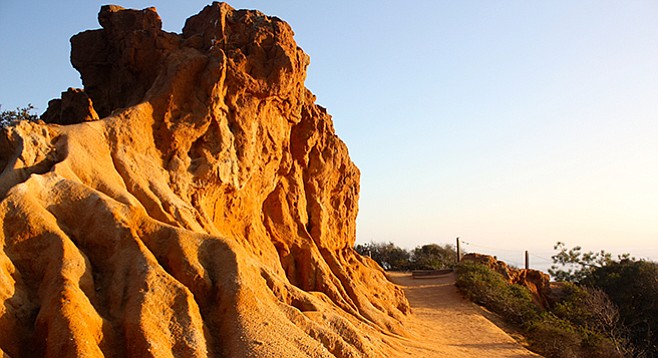 This short hike has sandstone badlands, a gorge, a sweeping coastline, and the namesake Torrey Pines.

The Razor Point Trail in Torrey Pines State Natural Reserve meanders through high-quality southern maritime chaparral habitat, offering stunning glimpses of the Pacific Ocean before ending at an outlook. The Razor Point Trail offers many well-placed benches to rest and enjoy the views, or for those interested in extending the hike, options to connect with other trails.

This route begins following signs for the Beach Trail before the first junction directs you in the direction of the Razor Point trail. Chamise (Adenostoma fasciculatum), California buckwheat (Eriogonum fasciculatum), and yerba santa are abundant at the start of the hike. By comparing the leaves of chamise and California buckwheat, you can gain insight into the Latin species name “fasciculatum.” Notice that the leaves of both species come out of the stems in little bunches, or fascicles. A fascis, or bundled sticks, was a symbol of power in imperial Rome, and was later symbolically used by the Italian Fascist Party. Be sure to examine any flowering buckwheat closely to view its characteristic pink pollen. And listen for the sound of bees, which can often be found in great numbers on the flowers. While San Diego County is home to over 600 species of native bees, the introduced European honeybee will likely be the most conspicuous pollinator. Bees also will seek the pale lavender flowers of the yerba santa. 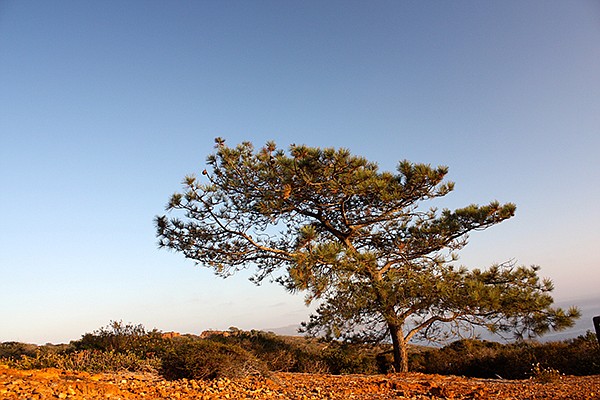 Yerba santa is a highly valued medicinal plant by California Indians. The Spanish were so impressed with its healing qualities that they named it the “holy plant.” Look for a shrub with thick, velvet-like, gray-green wooly leaves that may have saw-toothed edges. Smell the fragrant leaves. Local Kumeyaay Indians would eat the leaves in addition to making a tea to use for colds and coughs.

When ascending the stairs up to Red Butte, take a moment to look at the hard, red rock underfoot, part of the Lindavista Formation. This hard cap that resists erosion was formed during the Middle Pleistocene, dating back to 1 million years ago. Identification of unique fossils found in the formation, coupled with radioactive dating of rocks, gives information on the age of the formation. The oldest rock visible in Torrey Pines, found at the base of the sea cliffs, is the Delmar Formation, which was formed 48 million years ago. While at Red Butte, notice the badlands to the south, made as the poorly cemented sandstone of the Bay Point Formation slowly erodes. Descending along the trail down from Red Butte, observe the rich and shiny colors of the mission manzanita berries. Ranging from red to black, the berries are visible in the spring and summer, preceded by large bell-shaped flowers in the winter months.

Upon reaching the Razor Point outlook, enjoy the view of the point jutting out beyond the end of the trail, the expanse of the Pacific Ocean, and more views of the badlands. The reserve’s namesake species are also easily visible from the outlook. The Torrey pine (Pinus torreyana) is the rarest pine in North America, with most of the approximately 7000 individuals growing at the reserve; a second subspecies of Torrey pine occurs on Santa Rosa Island with about 2000 individuals. Torrey pines have extensive root systems that can help prevent erosion, with taproots that extend down to 25 feet and lateral roots 225 feet away from the trunk. Torrey Pines start producing seeds around 12 and 18 years of age and exhibit delayed seed dispersal — seed fall beginning once cones mature about 2.5 years after pollination and continuing for the next 13 years. Most seeds fall from the cones by year 4 of maturity, at which point only about 22 percent of seeds are retained.

On the way back from the lookout, take time to listen for the familiar sound of the wrentit, whose call is several whistled “chips,” followed by a descending trill. Other “chips” heard may be coming from Anna’s hummingbirds, year-round residents of San Diego County and the heaviest of most hummingbirds, ranging in weight from about 0.11 to 0.21 ounce, about the weight of a penny and nickel, respectively. 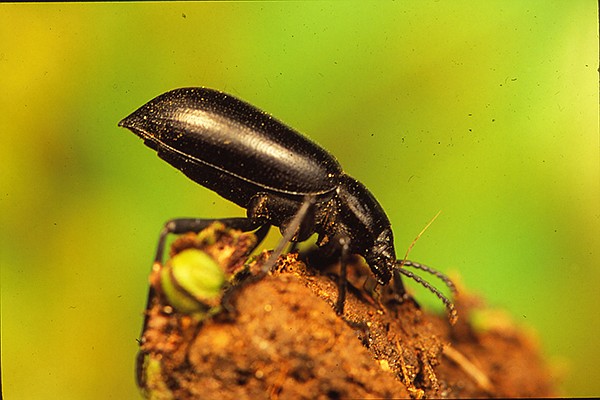 Looking closely at the trail, there may be a medium-sized, shiny, black stink beetle. When disturbed or upon sighting a potential threat, the beetle will raise its rear end, but contrary to popular belief, local species of this genus do not expel a cloud of noxious vapor. There are species that do produce quinones that “ooze” out stinkiness — not really vapors — when threatened. Then there are others that do not produce any quinones but mimic the threat behavior of those that do. In mimicry, some organisms will resemble another species or imitate a similar behavior to give them an evolutionary advantage, such as in the viceroy butterfly mimicking a poisonous monarch butterfly to have a survival advantage. 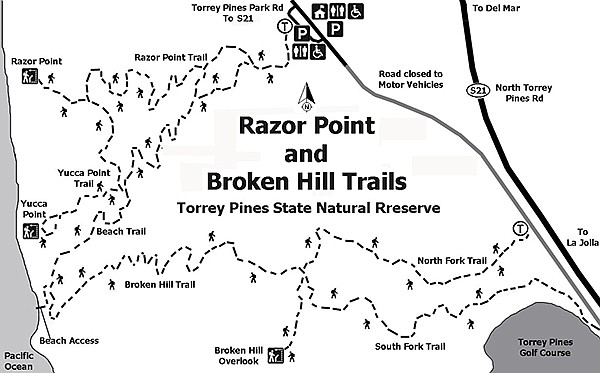 Hiking length: 1.3 miles total out-and-back. Allow 45 minutes for this trail. Additional time/mileage/elevation if parked at the lower lot by the beach.

Difficulty: Easy. Elevation gain/loss 250 feet. The trail is well-maintained with a gradual slope and some stairs. Facilities and water are available. No food, dogs, or bicycles permitted. Hours open: 7:15 a.m. to sunset.