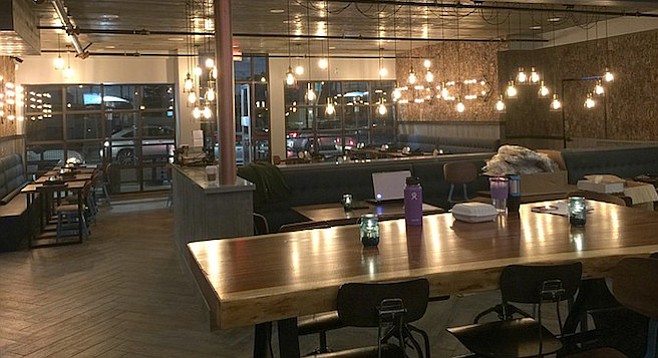 No shots, no pitchers, no Fireball.

As of January 7, the long anticipated Urge Gastropub & Whiskey Bank has opened to the public in Oceanside, and with it attached brewhouse Mason Ale Works is officially serving beer. The converted bank property brings a large beer presence to the South Oceanside neighborhood, with room enough for more than 200 customers in its dining room and patio. 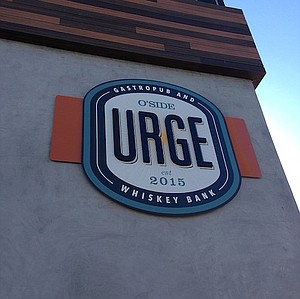 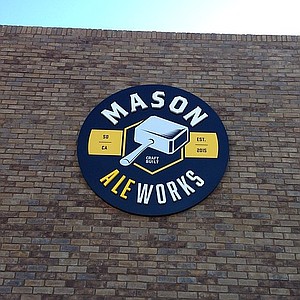 Grant Tondro, Zak Higson, and Nate Higson opened the coastal offshoot of their Urge American Gastropub in Rancho Bernardo, and the two venues share a lot of similarities, beginning with an elevated pub menu and comparable tap list. However, Tondro insists the new location will have its own sense of character: "We feel like chain is a four letter word, and we want to make sure that each one of our places has its own personality."

For starters, the Oceanside restaurant will expand food offerings, and 8 of the 42 taps will be devoted to brewed-on-site Mason beers. The biggest difference may be the full liquor license, which allows the new bar to offer 300 different bottles of whiskey — and not shabby ones, either.

Tondro echoes the sentiment that whiskey selection will be on par with the quality of craft beer customers have come to expect from Urge American's tap list. "Our philosophy is no shots, no pitchers. We're not that kind of place. There will be no Fireball here."

Likewise, the trio sought to ensure quality beer would flow from the tanks of Mason Ale Works, enlisting the experience of Mike Rodriguez to oversee brewing on the ten-barrel setup in the back of the restaurant. Rodriguez brewed at Kansas City's Boulevard Brewing for several years before spending five as head brewer at The Lost Abbey. He also brewed a number of collaborations for Urge American's fifth anniversary, including beers with Sierra Nevada, Dogfish Head, and Noble Aleworks.

Tondro says more collaborations can be expected, including with a couple of new friends across the country. When filing for a trademark, Urge's attorney discovered a Mason City Brewing in Iowa, and Mason's Brewing Company in Maine. With the lawyer encouraging a name change to avoid legal issues, Tondro sought a different solution.

"This is a cool industry," he mused. "These are all good people. Nobody has a big corporate 'this is my sand box — stay out of it' mindset." He was right. When Tondro contacted the other young breweries and asked if they would sign off on Mason Ale Works keeping its name, response was immediate. "They both said, ‘Sure. As long as we can do a collaboration beer!’”

The first beer brewed on the Mason system was a blond ale, and wine-barrel aging is already underway. So is construction on the next phase of the restaurant, the 101 Proof speakeasy, a semi-private bar built into the building's old bank vault, which will serve the restaurant's most high-end beverages.