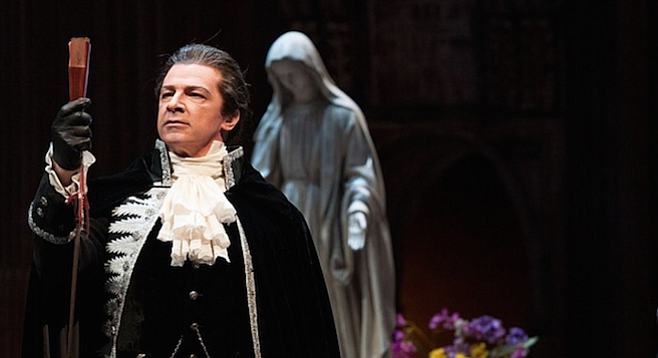 The season at San Diego Opera has begun

San Diego Opera has started their season of transition with Tosca by Puccini. It should be noted that all three productions this year were established by the previous regime. This season is not an indication of what is to come but rather a reflection of what has past.

The great thing about Tosca is the villain Scarpia. Should we doubt that he is the central figure, the final line of the show is about him.

The great thing about this particular production of Tosca is Greer Grimsley singing the role of Scarpia. He is one of the few singers to have ever lived that can cut through the menacing orchestral forces which accompany Scarpia’s music.

Grimsley dominates the stage at all times as is appropriate for an abusive, sadistic, cunning, monster. He’s a politician who doesn’t need your vote.

The orchestra, as conducted by the atomic Massimo Zanetti, was spectacular. The third act transition from the tenor aria to Tosca’s entrance was nothing short of a miracle with the grace note in the strings in perfect alignment with the emotion of the scene.

The music harkens back to the first act duet where, it must be pointed out, tenor Gwyn Hughes Jones inexplicably did not sing the grace notes. It might feel as though I’m making quite a lot of noise about grace notes, but they are one of the details in the score which makeTosca...Tosca.

Whereas Grimsley is a full-time Scarpia, Jones is a stretch in the role of Mario Cavaradossi. The color of Jones’s voice is on the bright side for Cavaradossi. He has a beautiful voice should we listen with a casual ear, but there are some vowel production inconsistencies that we won’t get into here.

Soprano Alexia Voulgaridou is also a stretch as a Tosca. The color and tone of her voice were in line with this spinto role until about an A-flat, at which point the tone spread and the color changed. Her acting was okay but Tosca’s sexual allure was missing.

The direction of Lesley Koenig was conventional and at times boring. There was a lack of sexual tension in the acting and the staging. The violence was also absent. Cavaradossi came out from his torture session wearing a spotless white shirt without a scratch on him.

They must have been using "the comfy chair" as a torture device a la Monty Python's Spanish Inquisition.

"He is one of the few singers that have ever lived...." the latter part of which phrase was italically emphasized, as if you had heard (the far more than few) singers who have done credit (perhaps even brought acclaim and a little bit of glory) to their performance of the role. Enough with the weasling out of it already. What the other singers did or did not do (spreading sopranos and a tenore corto) don't have anything to do with isuch a ridiculous assertion, as if you had heard every singer who ever lived.

What's sad is that, even in that little-boy style you adopt, you often have some interesting things to say. But you frame them in a way that undercuts their impact.

And enough with the ad hominem whining. I've never seen you, except from afar,and even after that I would not be able to identify you again if I saw you. I don't know anything about you except, precisely what and how you present yourself in these Reader bloglets. So neither I nor anyone else I know can hardly "attack" you as a person. If anyone "attacks" you, they are taking issue with the persona of that "Garrett Harris," and no other, so please let it go, whatever is at the root of it (insecurity, megolamania, wounded pride,...)

Christ. Harry we've already been over the ad hominem. If you are addressing the elements of the persona instead of the content of the ideas then you're dabbling in the great sin of current social discourse. The content of your comments address me more than they do opera. You don't like the voice I use and that's fine but we're not discussing opera so much as my writing style. You've a wealth of knowledge but instead of sharing that in a way that is inclusive you've identified yourself as separate from what you consider to be the petty tone here. I wish you would let the richness of your experience come into the conversation and give us some of the guidance you think is needed. Use your voice in your style but add to the conversation.

Yeats said, "Think like a wise man but communicate in the language of the people." Kierkegaard thought a sense of humor was more effective than polemic. That's the tone here, in a nutshell.

It is common knowledge that a Scarpia who can be heard throughout the role is rare. One need not have first hand knowledge of every bass-baritone in history in order to have an opinion on this. Name two singers currently singing that would be better in the role than G. There are people out there who think Thomas Hampson is a great Scarpia are you one of them?

Looking forward to attending on Sunday. I can't wait!

Breathtaking and magnificent! The brass sections of the orchestra were so true and strong, it was thrilling just to hear them.

All performances were excellent! This was my first Tosca, so I can't really compare it to any other. In my estimation, it was brilliant.

And the news that the SD Opera Company is in good shape was fantastic to hear. Bravos all around!