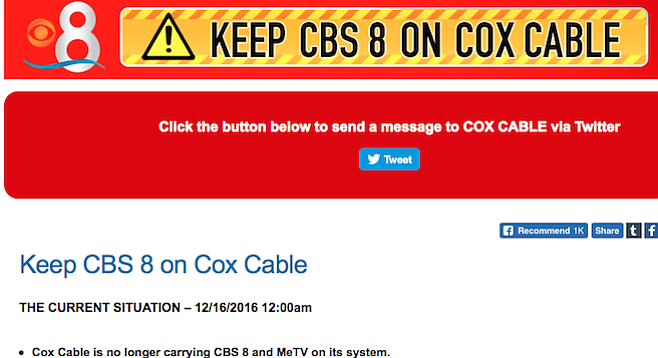 Cox says the station demanded a 1000 percent or tenfold increase in the payments it agreed to in contracts from three years ago that expire now. Meanwhile, Cox customers can pick up free antennas to snatch CBS 8 programs out of the air at Cox stores, according to spokeswoman Ceanne Guerra.

"We know our customers want us to keep CBS 8," Guerra said. "They pulled their signal when we couldn't reach agreement over the retransmission consent fees." Guerra declined to answer questions about the current fees.

Because both Cox and KFMB are privately held, it is difficult to get clear, accurate information about the current retransmission fees. But Wall Street analysts say the national average is around $1.40 per subscriber per station per month.

Last year, KFMB got into a similar fight with DirecTV and went off the air for three weeks. The station's big stick in negotiations is the Chargers games — with one against the Oakland Raiders scheduled for Sunday afternoon (December 18) here in San Diego. (At press time there were more than 1800 tickets available for those who really need a Chargers fix.)

Calls to the station and its parent company for comment were not returned Friday afternoon. Meanwhile, KFMB's website encourages its viewers to contact Cox and insist that KFMB return to its cable stable.

In November, the station celebrated ratings at the top of the TV news pile. "San Diegans have voted and CBS News 8/KFMB-TV wins the local TV race as San Diego's most watched television news station, dominating first place in every local newscast during the November 2016 ratings 'sweeps' period according to data released by the A. C. Nielsen Co."

Taking a page from last year's DirecTV fight, Cox has put up a page called CoxCommitment.com that tells customers: "You deserve the most value from every show, network, event or team you pay to watch on TV, and delivering that value is Cox Communications' responsibility."

Last year, DirecTV fended off a barrage of calls and emails from subscribers — similarly rallied by KFMB — that said: "When disputes arise with programmers over their rising prices, this site will keep you up to date with clear and direct information."

In the meantime, KFMB fans will have to bust out those antennas and hope they can catch the signal from the station's Kearny Mesa facility.

Just like the old days--the Charger game will be blacked out. Ironically, this game will be the only sell-out all year. Thanks to all the Raider fans.

And...just like the old days, the blackout has been lifted.

Cox and KFMB have tentatively reached an agreement - service to be restored.

Great to hear. Most of my fave shows are on CBS. [I don't have any cable networks, and I don't do Netflix.]

If KFMB-TV was getting $1.40 per cable subscriber per month national average as reported by financial analysts, and demanded 1000% more per subscriber per month, I'm just wondering where they settled, what this is going to cost and how Cox is going to pass this along to all of us "subscribers". I fear the domino effect. Now other local TV stations will demand parity and I forsee a large increase in the cable bills.

If Cox raises your bill for that reason, just tell them you're going to cancel. Then see how quickly they change their tune and say "please don't go."

All facts here. The Titles of the story tell it all. A rare story on the Reader that is credible. Marty Graham is an effective freelance writer, not a biased union loving one like Reader reporter Susan Luzzaro (and her union loving gadlfy entourage of posters).

I did not see anything in the article about unions or union employees or union contract negotiations. This was a financial dispute between two privately held company's. What KFMB did is akin to a strike in that they withheld their money (like a lockout by an employer) from Cox. Cox, on the other hand, could not refuse to carry KFMB. Your ignorance about unions shows in your response.

Thank you, Cox, for sparing us from a six o'clock news team that reflects none of the diversity of San Diego.

So you are suggesting they hire people because of the color of their skin as opposed to their education, experience and talent? No wonder this PC obsessed county is going to the dogs.

Ponzi: Sadly it's not just the county. It's the whole country. Looks like global warming IS a falicy, none of the delicate snowflakes are melting. If this continues there's no doubt our demise will follow.

So you're suggesting that the only qualified, talented, and experienced people are white? This isn't the 1960's Ponzi!

True, in the 1960's they didn't have the unfair "affirmative action" giveaways like they do today. Today is more racist than the 1960's because institutions are forced by the government to use a quota system which discriminates.