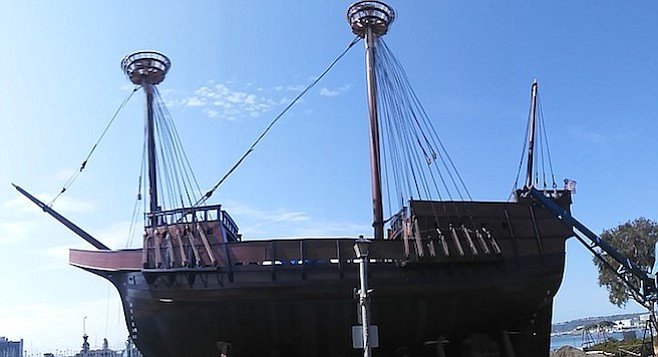 The price of making history

Sail the San Salvador — only 995 bucks

Just as in 1542, when Spanish explorer Juan Rodríguez Cabrillo sailed the first European-type vessel up the California coast, the Maritime Museum of San Diego is getting ready to sail its full-scale replica of Cabrillo’s ship, the San Salvador, on its maiden voyage.

As part of Labor Day weekend’s annual Festival of Sail, the ship will depart on September 5 from San Diego Bay with four ports-of-call, until it returns at the end of October.

Following the historic route of Cabrillo, stops will be made in Oxnard at the Channel Islands Maritime Museum, in Monterey at the Monterey State Historic Park, and in Morro Bay at the Central Coastal Maritime Museum.

However when the ship leaves Morro Bay on October 10, to head home, members of the public can sail back in time, as the San Salvador will welcome amateur sailors aboard.

For a fee of $995, you can sail aboard the San Salvador for four days, on one of three legs which follows Cabrillo’s historic return journey back down the California’s coast.

Leg One will sail from Morro Bay through the Channel Islands. Leg Two will circumnavigate Catalina — Avalon to Avalon, where Captain Juan is believed to have suffered a broken leg and died in January of 1543. Leg Three will depart Avalon, as Cabrillo’s crew did, and return to San Diego.