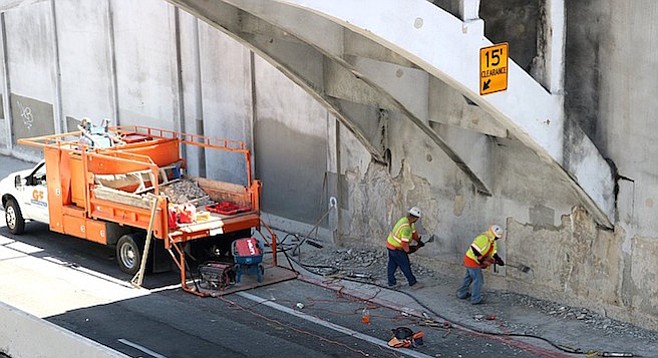 After decades of back-and-forth about whether to demolish or restore the Georgia Street Bridge, restoration of the 102-year-old structure began on August 3. The project was supposed to break ground in the fall of 2015 but was delayed due to funding and planning issues. As recently as July 26, items were on the city-council docket to accept additional federal funding ($1,010,537) and to award a consultant agreement (construction management). 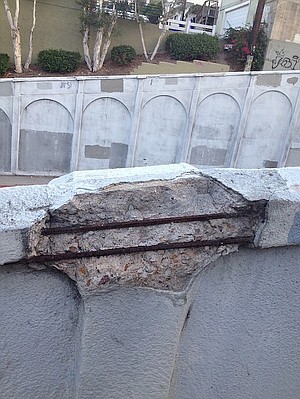 Rebar rusting from the inside out

Councilmember Todd Gloria has been pushing for the bridge rehabilitation in his district since 2008. Gloria said the project budget is $14 million, with $12 million from federal grants and $2 million from county sales-tax revenue (TransNet). The project is slated for completion in summer 2017. The first phase is focused on constructing an upgraded seismic retaining wall and reducing the elevation on University Avenue.

The arched bridge was built in 1914 to replace a smaller redwood bridge, built in 1907 after the high ridge of Georgia Street was cut to allow an electric streetcar line to travel eastward beyond city limits. This not only led to communities like City Heights growing but also to numerous streetcar suburbs, including a former lemon grove that became North Park in 1912.

Demand for more streetcars in 1912 led to the widening of the artificial canyon created in 1907. The solution to preventing the 680-foot wall of dirt along University from collapsing onto the roadway was found by city engineer James Comly. He came up with the idea for the retaining walls that run along University between Park Boulevard and Florida Street. Comly also decided on the open-arched bridge design and the use of steel-reinforced concrete, allowing for more durability and artistry. 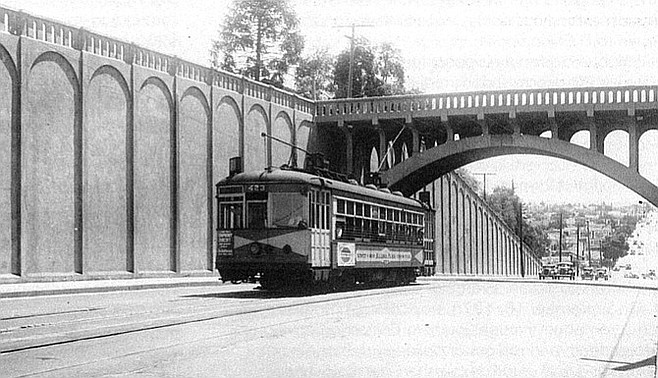 By 1949, buses and highways replaced streetcars, leaving this once-important thoroughfare to fall into disrepair.

In 1994, a local historic designation hearing was held. Arguments in favor of demolishing the bridge were heard. The city supported both designation and demolition. “Functionally obsolete” was the argument cited for demolition due to the height hindering trucks' passage under the bridge. Lowering University Avenue at that time was rejected due to a water main under the road. The bridge was designated historic in 1994 and not demolished due to public outcry.

“Yes, there was very serious talk of demolition," recalls North Park planning chair Vicki Granowitz. "Caltrans got some money, so they wanted to do something. They were going to tear the bridge and wall down in the 1990s. What I recall is that there was contention between the city and the community as to the bridge's structural soundness. A structural analysis was done and it was fine. There certainly was concrete falling off the bridge, so someone suggested gunite [cement/sand/water applied with pressure hose] to stabilize the bridge until it could be restored.”

Caltrans later found the bridge to be structurally unsound, but in 1988, the city’s Park and Recreation Department noted its condition as “excellent” in a historic resources inventory. Threats listed were “vandalism” and “public works project.”

“Ultimately, Alex Bevil saved the bridge,” said Granowitz. “He’s the hero of the story as far as I‘m concerned. The community can do what the community can do, but he is the one that really got in there. He did the national designation on his own dime.”

National historic designation was granted in 1999. Bevil cited the Georgia Street Bridge as being among the most visible and important manifestations of early 20th-century civil engineering projects in San Diego. 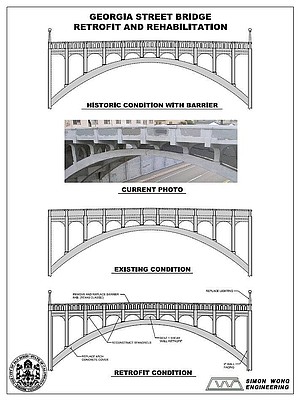 Comparison of the 1914 design with the bridge's current state

Granowitz said the current rehabilitation should bring the bridge back to its 1914 grandeur, before artistic details were masked or removed. She also said, “The streetcars are gone, but I bet the old trolley tracks will be there when they dig up the road.”

According to city documentation, from at least 1994 until 2012, bridge demolition was on the table, as evidenced by the city hiring a consultant in January 1995 to study a replacement option. In a more recent 2012 report, three of the five options being looked at were for replacement.

On August 5, an older gentleman walking his dog over the bridge said, “It’s hard not to see those open arches and grand wall and see it as anything but history. That bridge did more to put North Park on the map than anything else I can think of.”