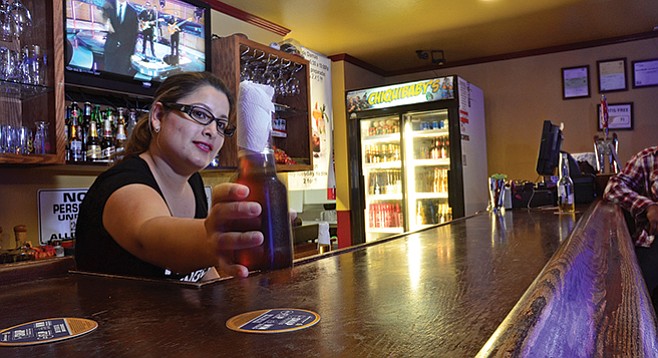 Chiquibaby’s isn't trying to be anything but a bar

An evening of obscure karaoke corridos and two buckets of beer

San Diego is home to a number of Mexican bars that follow more or less the same format. You’re probably already familiar with it. You can hear the corridos blasting from blocks away. Buckets of beer are advertised in the window. There’s almost always a vinyl curtain serving as a door into a room where the clack of billiards punctuates banda ballads. Someone inevitably exclaims, “No mames, güey!”

I’ve always loved these places, largely because of their simplicity. They aren’t trying to be anything but a bar. We’re here to drink, to talk, and maybe slam some tostilocos. But I’ve also found them kind of pointless, with Tijuana just down the Blue Line offering all the same at half the price and smoking allowed, if you’re into that.

I was expressing this notion to Reader contributor Matt Suárez one Monday evening at Chiquibaby’s — how the vibe is always good but nothing ever really happens — when our bartender came around and gave us each a raffle ticket. With about 14 people in the room, the server announced that she would be raffling off two buckets of beer. The odds were favorable. Matt’s ticket hit. A bucket of Modelo, Bohemia, and Stone IPA bottles appeared. Suddenly, the karaoke machine roared to life and the regulars goaded us to sing, a ritual obligation for the free beers we were about to drink. A young local and his lady friend joined us at a table as Matt launched into the first verses of “Te Ves Fatal.”

“Forgive my appearance,” the woman said, pointing to the thick makeup that failed to conceal several gruesome blisters on her upper lip. “I was huffing poppers at a party and spilled it on my face. You can’t notice, can you?”

I very much could, but I was so smitten by her ride-or-die commitment to partying that I pulled her from her chair as Matt’s applause died down and together we bellowed out what may well be the worst rendition of “Estos Celos” ever to be unleashed on Logan Heights. Matt was kind enough to record the whole thing. The night continued with obscure karaoke corridos and vocal outpourings that were more James Chance than Chente until 10 p.m. hit and everyone was sent home.

In the end, I was wrong about Chiquibaby’s, and I’m glad. I just can’t wait to see what a Saturday looks like.

Food: shrimp cocktails, ceviche, and tostilocos, all under $6

To do: karaoke Mondays and Wednesdays, live music weekends