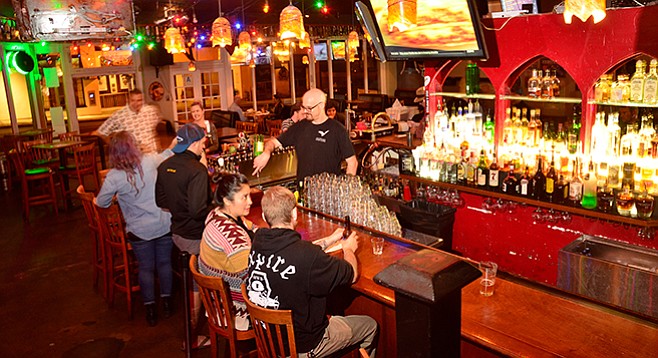 The locale on the corner of Grape and Fern was built in the late ‘40s as a laundromat and went on to operate as a thrift store, a lighting store, and a “Cuban restaurant with a questionable reputation,” according to Darlene “Mom” Neitzke, who you can find sipping wine at the end of the bar most evenings in her spot designated by a small placard.

Darlene cashed out her retirement to help her son Adam open the South Park Abbey in late 2011. At the time, the idea was to donate 3 percent of proceeds to various charities, hence the bar’s byline: “Delicious food. Great beer. Philanthropy.”

The initiative proved too cumbersome for the young business, which instead hosts fundraiser events for groups such as the Renegade Rollergirls and the Crohn’s & Colitis Foundation. The dog- and family-friendly sports bar is home to a contingent of ‘Bama Crimson Tide fans and boasts the most extensive beer menu in South Park with 36 taps, a few bottles, and a tap of room-temperature red from Fallbrook Winery for good measure. A rotating beer of the day goes for $4, which is what a well cocktail will set you back during happy hour.

However, it’s easy to rack up a sizable bill here if you aren’t careful. The Abbey’s famous wings are slow-smoked out back and then fried in the kitchen, and some say they’re the best around. At $10 per half dozen (or $18 for 12), they’d better be — this economy...am I right, guys? The truth is they’re pretty damn good — big, juicy, flavorful — and you can take 6 for $6 on Mondays, when burgers (which come with a tantalizing, San Diego–brined Skerry Hot Pickle) go for the same price. Wings come with a choice of nine sauces (one per order), including house favorite “dirty” sauce — a mix of ranch, sweet & spicy, and buffalo.

The Abbey’s breezy windows and patio overlooking the Target Express make it a popular destination during brunch and weekend dinner hours, which means that service can occasionally take a hit. But that shouldn’t stop you from showing up for $12 bottomless mimosas from 9:30 a.m. to 2 p.m. on weekends. The crowd is generally a mix of sports fans, beer geeks, families, and neighborhood regulars. If you stick around long enough, you may even have a chance to clink glasses with Mom as karaoke kicks off.