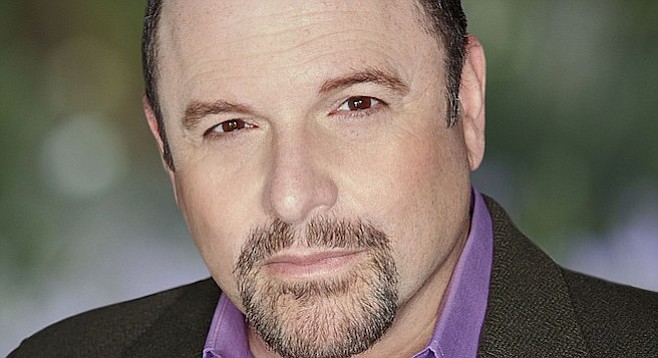 The comedian sings us a few songs

Jason Alexander, known to all as George Costanza from TV’s Seinfeld, is a good old-fashioned song-and-dance man. He showed off his singing chops and dancing hoofs at Symphony Hall on Saturday night, April 9.

The show started with the San Diego Symphony playing selections from Bernstein’s West Side Story, Cole Porter’s Begin the Beguine, Gershwin’s Fascinating Rhythm, and Lerner and Lowe’s My Fair Lady.

After intermission Mr. Alexander grapevined out and greeted us with a song. He was a great showman from start to finish but there were a few oddities. The biggest was the sound quality.

He used two microphones one was a body mic and the other handheld. Neither worked well. The quality sounded as if he were singing in a sports arena and the volume of the mic’s was too low. In between numbers his speaking was fine but when the orchestra was playing he faded into the background.

It’s a shame that a technical error got in the way of a fantastic show.

The show was far more than Jason Alexander singing. There was a theme that ran through the show along with, of course, a stream of comical bits. However, it is poor form to discuss a comedians bits. Ruining the bit is a bush-league move.

Suffice it to say that Mr. Alexander is “a beloved international comedic star.”