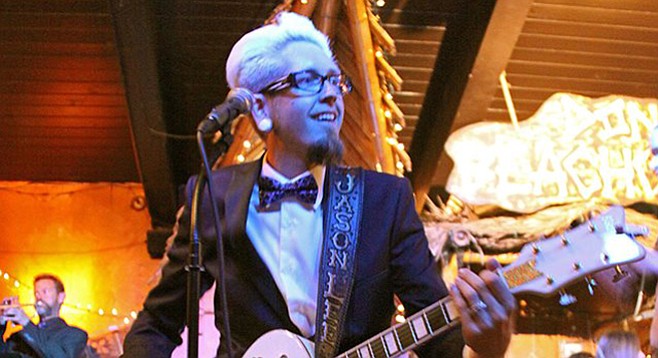 "I wrote 11 different charts. It took me three months.”

“When Metallica [played with an orchestra], it blew me away,” says Jason Lee, a veteran rocker who has fronted the surf-guitar-inspired Riptides for 13 years.

Lee took the orchestral plunge with his other band called the Black Tides, the loungey exotica combo that has been a favorite of the annual Tiki Oasis held every August at the Crowne Plaza in Mission Valley.

“I always envisioned a ’60s spy-sound orchestra with go-go girls. I wrote 11 different charts. It took me three months.” The result was a sold-out show before some 200 who paid $55 at Don the Beachcomber in Huntington Beach last month.

Lee says a trumpet-playing friend and another who’s a cellist assembled the orchestra. He says the 15-song production was a challenge because there were a lot of moving parts and not much pay for the 25 people involved.

“I sent out videos of me playing guitar with the charts playing in the background. The orchestra had to do a lot of homework.” Lee says there were just two full orchestra rehearsals at Hindsight Rehearsal Studios in Mira Mesa and one on the day of the show in the venue before the show.

“We did ‘Ecstasy of Gold,’ from The Good, the Bad and the Ugly. It was a big cinematic song. Then we had Taryn Donath sing [‘Goldfinger’ vocalist] Shirley Bassey’s version of ‘Light My Fire.’ People flew in for the show. Every seat had a name on it and every seat had a program. It was pretty emotional. Guys with tattoos were crying.”

He says the Black Tides basically play the Riptides’ original surf-guitar songs, “But slowed down and done to a samba or calypso beat.”

Lee is best known as “Flock” due to his ten-inch-high blonde coif that stood erect thanks to Giga Hold hair spray.

“I had it when I started working at Guitar Center [in Escondido] when I was 19. They named me after [the front man of new-wave band] Flock of Seagulls. But I actually did it because of the blonde kid in Archie comics.” He’s still Flock, but the big hair went away.

Jason Lee and the Riptides appear October 27th at the Pour House in Oceanside.