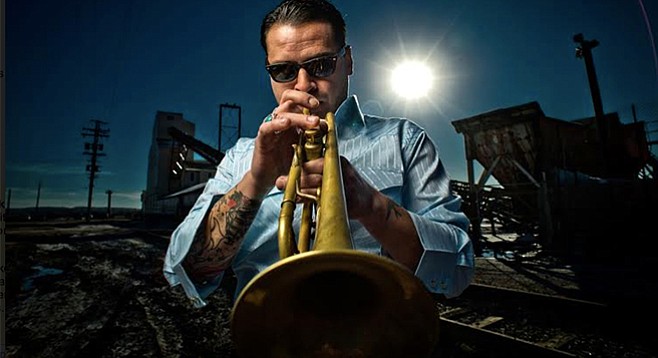 Jason Hanna, brassman to the bone

After Herb, it's on to schmaltz-free Mendes, Bowie, Ellington...

Jason Hanna can walk from his home in I.B. to the beach where, on a clear day, he can see the bullring where Herb Alpert and the Tijuana Brass made one of the first music videos — for “Lonely Bull,” the 1962 hit that launched the Tijuana Brass and A&M Records.

He now fronts Jason Hanna and the Bullfighters, a sharp-looking but schmaltz-free tribute that honors the ’60s’ most successful instrumental band.

“I was born in San Diego, but my mom was born in Tijuana,” says Hanna. “I grew up listening to the Tijuana Brass, Sergio Mendes, and the Baja Marimba Band. I had wanted to do this project for years. I describe our style of music as space-age pop based on the Tijuana Brass. It’s a mix of jet-set swing, ’60s garage rock, surf rock, and Latin bossa nova exotica....

“One day I would like to recreate that original video and rent out the bullring for an afternoon. I couldn’t afford a helicopter for that opening scene but I think I could get it with a drone.”

After graduating in ’99 from Valhalla High, Hanna’s training in that school’s band program helped him to segue directly into the U.S. Navy Band.

“They audition you pretty hard,” says Hanna. “There were 12 different bands you could go in. I was in the Admiral’s Band. We played a lot of embassy functions for dignitaries. We toured Europe and Africa. We learned ‘Africa,’ by Toto, just so we could play ‘Africa’ in Africa. We learned ‘A Night In Tunisia,’ by Dizzy Gillespie, when we played there.”

Hanna was stationed in San Diego when he was discharged after 14 years. For the past four years he’s supported himself in jazz combos, by side jobs, and recording gigs. He anchors regular jazz gigs at the Riviera Supper Club, US Grant Hotel, and the Cat Eye Club.

“My two best friends when I was stationed in Naples have since moved out here to join me,” he says of his drummer from Philadelphia and his bassist from Wyoming. “We played together for 12 years.”

North Park Festival of the Arts

The first Bullfighters album, Taking the Bull by the Horns (released in January), has brassy covers by Bowie, Duke Ellington, and Carole King. Hanna has recently done local session work with Stephen El Rey, Pony Death Ride, and Jason Lee and the Riptides.

Jason Hanna and the Bullfighters appear at the North Park Festival of the Arts this Saturday.