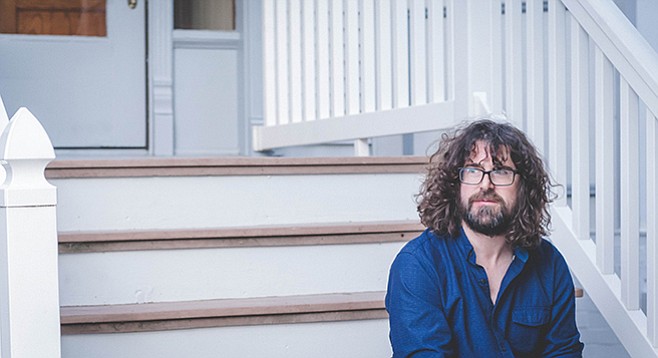 Lou Barlow grew up in Massachusetts and stumbled into Dinosaur Jr., which helped define an era of alternative rock when they weren’t marinating in backstage passive-aggression. Solo, Barlow started Sebadoh, pioneered the entire “lo-fi” thing, and with strange aeons, found himself back in Dinosaur Jr. but still a solo artist, too. He brings himself and his new album, Brace the Wave, to town September 25 at his much-beloved Casbah. He furnished some ellipses-laden answers to the Reader’s email questions.

...off of Lou Barlow's new record, Brach the Wave

What are your favorite memories of playing San Diego?

“It’s almost entirely defined by the Casbah. The original Casbah was so incredibly tiny it was like playing a house show. But the level of enthusiasm and the idea that the place was accepted as the most important spot in SD was contagious. So when it moved into a larger but still very intimate space, it was easy to look forward to playing there. I may have played there more than any other club in the country.

“I’ve played a few other places in SD. I remember a Sebadoh show at the World Beat Center in which the audience talked loudly over an opening set by Elliott Smith. It made me really mad and I went on to criticize them and explain that Elliott was worth more than that, etc. In general, SD is hard to crack, so it always comes back to the Casbah, which is fine by me. I love the place.”

Which songs on the new album are you most proud of?

“‘Moving.’ It has a momentum and layering scheme with the ukulele in the recording (it’s 100 percent ukulele) that I’ve tried to produce for a long time. It echoes my earliest work (thought to be my strongest) but in a new light. I’m really proud of that one.”

Which songs were the hardest to realize, and how did you solve your challenges?

“I wrote and rewrote ‘Wave’ a few times. It started as ‘Break the Wave,’ which made no sense to me but persisted as a phrase that felt good to sing/say...I tried the melody on standard guitar with a foot pedal synthesizer...I tried it on bass...nothing worked. I almost gave up on it but in my last days of living in L.A. (Glendale, specifically), I recorded an instrumental version that I didn’t think much of until I moved to Massachusetts. At that point I set up a mic, rewrote the lyrics, and recorded a vocal that worked for me. I changed ‘break the wave’ to ‘brace the wave’ and that was it.”