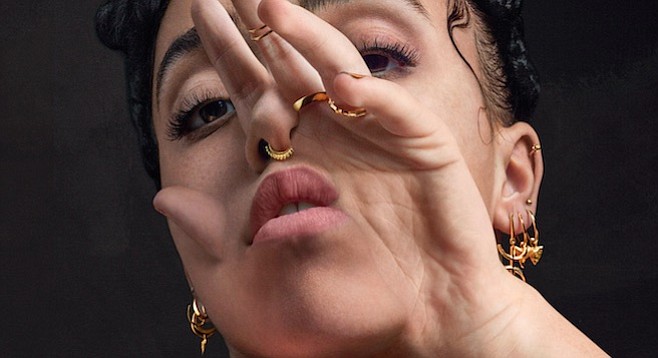 How far is FKA Twigs willing to go?

If the British singer's latest, M3LL155X, is any indication, quite far

There’s good reason FKA Twigs commands a captive audience. The young British singer, songwriter, and dancer has been winning accolades since her debut, LP1. Her eye-popping music videos are often overtly sexual, without revealing anything, and demonstrate her mature grasp of performance art, skirting the hazy line that separates NSFW and slick production.

Her latest EP, M3LL155X, moves fluidly through electro-pop, trip-hop, soul, house, and R&B. The songs house her hushed and porcelain vocals, which can drop to almost nothing in one measure and soar wildly in the next.

The scratchy, drawn-out groan she emits in the electric “Figure 8” is a testament to how far she’s willing to go in music. On the explosive "I'm Your Doll," she portrays a blow-up doll ready to do her bidding. "I'm feeling like a loaded gun, and when it’s done, I’m the only one," she whispers.

For the synth-pop dance song "In Time," she implores a man to stay committed, but in the next breath softly warns him, “The way you dismiss me/ Will turn into missing me like I am yours.” On the tempo-jumping single “Glass & Patron,” she experiences a catharsis that frees her from the deep-seated pain of “being told who I am.” It’s her version of “Vogue” for the 21st Century.

Few others in music are taking the kinds of risks that FKA Twigs is fast becoming known for, and this five-song set is just the shocking tip of the iceberg.