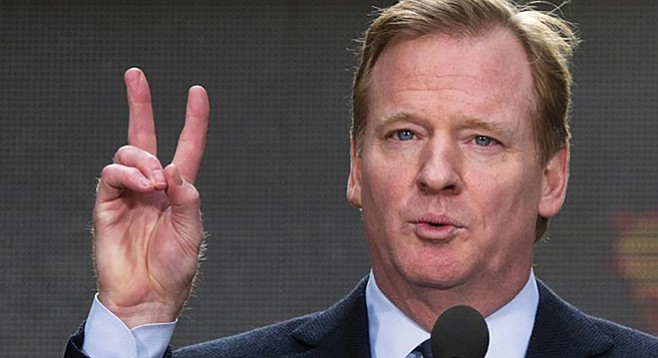 The NFL will lie to you. Anytime. Anywhere.

Listen up. The NFL will host, “San Diego Chargers Public Hearing on Potential Relocation” on Wednesday, October 28, from 7 to 10 p.m.”

The event will be produced at the Spreckels Theatre (121 Broadway) and is open to the public, sort of. It will also be livestreamed at NFL.com/publichearings.

The NFL has gotten rich, rich, rich off of gouging the public. They gouge their fans from every conceivable angle, starting with the many hundreds of millions of dollars in stadium subsidies, infrastructure improvements, on down to ticket prices, season-ticket prices, personal seat licenses, parking fees, $10 beer, and way, way, all the way down to 14 NFL franchises billing the Defense Department $5.4 million as payment for staging patriotic events honoring U.S. troops in their stadiums. Breaking new ground here. The NFL is as rapacious as, say, Goldman Sachs.

But even Goldman Sachs doesn’t extort the nation’s largest cities in public. Demanding, and getting, the dumb public to hand over hundreds of millions of dollars like it’s some kind of pro football tithe is regarded as routine. If you think these thugs will give the slightest consideration to the opinions of San Diego Chargers fans, Bernie Madoff wants to talk to you.

Wednesday’s dog-and-pony show reeks of NFL ego and manipulation. In other words, it’s business-as-usual. This very much like hiring ex-FBI director Robert Mueller and having him conduct an “independent investigation,” overseen by two NFL owners, on the NFL’s handling of woman-beater Ray Rice. Mueller produced a laughable report whitewashing the NFL and commissioner Goodell. Repeat with Deflategate.

And now we have the following: according to the NFL, “The purpose of these hearings is to provide an opportunity for fans and others in the community to ask questions and express their views directly to the NFL before any decisions are made about potential relocation of a club or clubs from a current market.”

The NFL has learned that it doesn’t have to be believable, and this Chargers relocation show surely isn’t. What it is, is insulting and self-serving, but that, it turns out, is more than enough to get by. 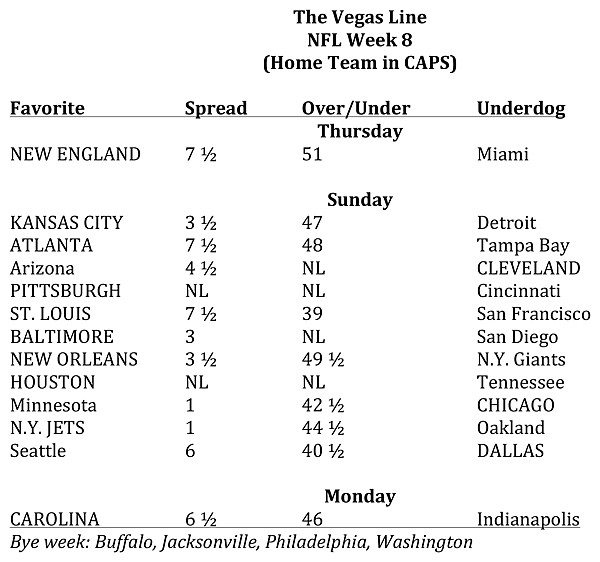 One wonders... Who are Chargers fans going to express their opinions to? Nobody from the House of Spanos will be there. Goodell won’t be there. No owner from the NFL’s six-member Committee on Los Angeles Opportunities will be there. No president of CBS Sports, NBC Sports, FOX Sports, or ESPN, much less DraftKings, will be there. Instead, “...members of Commissioner Goodell’s executive staff will be in attendance to listen to comments and answer questions from the audience.”

You cannot find a bottom to NFL arrogance.

The NFL says, “The hearings are open to the public and a free entry pass is required to attend. Pre-registration to request an entry pass begins tomorrow....

“Those interested in pre-registering to request an entry pass should visit the appropriate web page listed below.”

Okay, I went to the page and signed up. I’m pleased to report, “Audience members who have the opportunity to provide comments will be allotted three minutes in order to enable as many people as possible to have their voice heard.”

We don’t know who deems malcontents to be disorderly, or what standards deemer employs to judge deemee’s behavior. We do know the NFL will happily lie to you. Anytime. Anywhere.

It's excruciating to read the list of steps required for members of the paying public to get a barcoded entry pass to be heard today by a bunch of third-string NFL functionaries.

These guys must have taken a leaf from the playbook of public school boards of education which launch expensive superintendent "searches" by hilariously seeking input on "desirable characteristics" for their next six-figure-salary "educator/leader."

My belief is that we should let the Chargers leave this California City of San Diego, and get a real winning football team that is well deserved of this fine city!

I feel we should organize the recall of mayor Kevin Faulconer. Unless the people can assemble a list of good deeds he has accomplished, his only claim to fame is chasing the Chargers. He is the most useless mayor in the history of San Diego. Please prove me wrong. But I really don't think anyone can.

You're absolutely correct. Well, maybe he isn't MOST useless because there have been some other truly useless ones. Dick Murphy immediately comes to mind. But Kev came to office talking about making headway on reducing the massive city infrastructure maintenance backlog. That should be the priority item for any SD mayor, and will be for many, many years to come. But other than one tepid pronouncement, which involved a tax hike, we've heard nothing from his "honor." He's now, as you say, chasing the Chargers, even as the team spits in his face. Fabiani uses every opportunity to insult the city and its mayor, yet Kev comes out with the assurance that he can make a plan to get a new stadium and keep them. He won't acknowledge that the team wants to leave, based on the team's words, deeds, and demands.

Beyond the infrastructure needs--if you don't know what I mean, just say "potholed streets"--the city needs to pay more attention to the public safety functions, mainly fire and police. The SDPD needs attention and probably an overhaul, and the pension mess has just been swept under the rug. All of the neglect has created a cluster of time bombs which will go off, and sooner than too many San Diegans think.