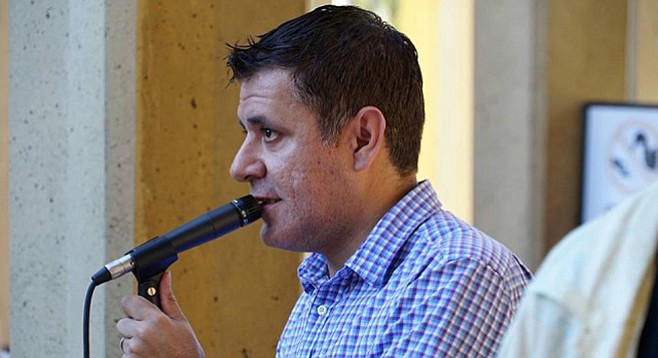 The game has changed for San Diego jazz scene

“I found out my jam session at Seven Grand was being canceled with just one week’s notice,” trumpeter Gilbert Castellanos related to the Reader over breakfast at Swami’s in North Park. “I mean, the manager, Peter Graves, was great, and I loved working with him. He did all he could for us, but ultimately the owners are based in L.A., and they’re going to do what they want.”

Which left Castellanos in a bind. He was already busy with his Young Lions Series, at new venue Panama 66, a series that showcases talent under the age of 25, and now he needed to find a joint for the jam session on short notice with the additional challenge of pulling it off on the same night.

“When I told Jeff Motch [co-owner of Panama 66] that my jam session was in trouble, he said, ‘Why don’t you just have it here?’” says Castellanos. “I was hesitant ­— I mean, I wasn’t sure the venue could support two separate bands, but now I think it’s a brilliant idea, because now we’re going to have music from 6 p.m. until midnight — six hours of music on a Wednesday night — I can’t think of another venue that does that outside of New York.

“I’m really excited. This is the first time in the history of the session that it will be an all-ages event. Now the jam will actually be catered to the young musicians I’ve been mentoring. For this to happen in San Diego is sure to take things to another level — now these kids will be able to rub shoulders with seasoned veterans like Rob Thorsen and Joshua White — you know, the top players.

“The game has changed now,” Castellanos continued. “Panama 66 is going to signal a whole new chapter in how the music is presented. Not just my thing — there’s a whole sense of community I’m talking about here.”

Some fans have inquired about the possibility of rain, since the venue is outdoors, but Castellanos remains enthusiastic. “People have brought that up, be we have a plan. If it rains or gets really cold, we’ll just move the whole thing next door, inside, where they have a 400-seat theater. We won’t skip a beat due to inclement weather.”

Panama 66 is located in Balboa Park, at 1450 El Prado. The jam session begins its residency on October 7.