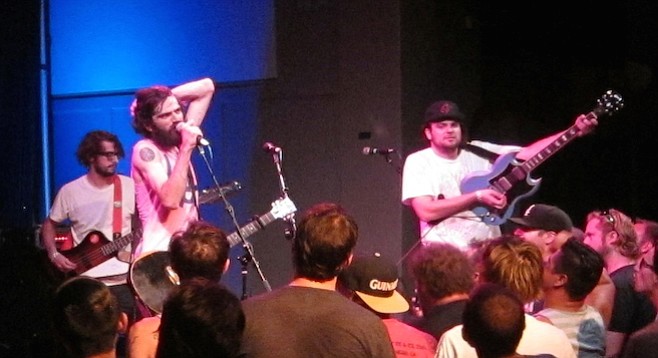 May the Force be with Titus Andronicus

...and not the police force

The Titus Andronicus van rolled into town on the same night as the Foo Fighters traveling circus. Whereas Dave Grohl and Co. most likely played to a sold-out Sleepy Train Amphitheatre, Patrick Stickles and his band of mercenaries rocked out a church at about half capacity.

...off of Titus Andronicus' latest, The Most Lamentable Tragedy

After an earsplitting set from Chapel Hill’s Spider Bags, the boys from Titus Andronicus made their way to the stage. The set was notable for its loose feel. Similar to bands of yore such as the Replacements, the group is unafraid to tread into the waters of ramshackle covers during their live shows. At one point, singer/guitarist Patrick Stickles told the crowd how his marijuana grinder had been confiscated by border agents on the way to San Diego, and then lead the band through a rousing, impromptu cover of the Clash’s “Police on My Back.” How much did they practice this? Before they started, Stickles called out the chords and told the rest of the band to follow his lead.

The main set was sprinkled with plenty of goodness from the band’s new rock opera, The Most Lamentable Tragedy. It was no surprise that the album’s best anthems, “Fatal Flaw,” “Fired Up,” and “Dimed-Out” were all rolled out on this evening. It was an added treat to see the super-fans all screaming along to each of these as well. I guess I was just surprised that there weren’t around 200 of these super-fans as opposed to, maybe, 25. The group seemed unfazed by the undeniably lame San Diego turnout, though. They even treated the attendees to a shredding rendition of the main theme from Star Wars at the end of the night. I think George Lucas would dig Titus Andronicus. Even in the direst of circumstances, they use the Force to elevate themselves to greatness.