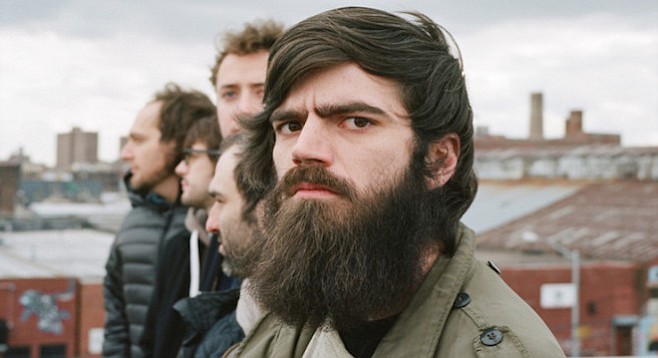 Stickles's march to the sea

"If the guitar is not loud enough, then my brain is louder, and it’s not gonna work”

"Tell the world my story. Nobody believes me. They think I’m bullshitting them.”

The story Titus Andronicus mastermind Patrick Stickles is referring to is a complicated one. Much of it is peeled away within the songs on the band’s new album, The Most Lamentable Tragedy, but even the 90-minute rock opera fails to encompass the tale. The work revolves around Stickles’s own experience living with manic depression and involves frequent visits from a doppelgänger who exerts his influence on him. Like many rock operas, it’s a complicated affair that is anchored by a healthy smattering of future anthems. Take, for instance, “Dimed-Out,” a raging diatribe detailing one of Stickles’s key traits: the desire to experience any life event as if it’s an amp cranked to 11.

...off of Titus Andronicus' latest, The Most Lamentable Tragedy

“I had an epiphany recently that I like music, or even just noise of a certain volume,” Stickles explained. “Even just the taste of straight-up lemon right to my mouth. These things mirror, if they can’t fully transcend, the intensity of my inner world. If the guitar is not loud enough, then my brain is louder, and it’s not gonna work.”

“Dimed-Out” also taps into another of Stickles’s intriguing qualities — his love of rap and his power as an MC. Although, on its surface, the song is very much a manic rock song, upon closer inspection, its lyrical roots are planted in the New York rap scene.

“A lot of those songs started out with that kind of cadence...not that I ever intended for them to be rap songs, but they basically are. ‘Dimed-Out,’ for example, is just me trying to be a rapper as far as saying, ‘I’ve got bars. I can spit them right out, and I mean it. I live these rhymes and I can do shit with words that these other mother-fuckos can’t do. And I’m doing this as a response to an inherently violent and oppressive society for everybody.’ That’s what a real MC is. In New York, anyways, that’s what’s up.”

Stickles cites NYC rappers such as the Wu-Tang Clan, Biggie Smalls, Redman, and even Lauryn Hill as influential for their “cut their heads off” lyrical style. Perhaps as a result, he has adopted the competitive nature of the rap elite into his own world. He views Parquet Courts as his lyrical arch nemesis.

“Craig Finn [the Hold Steady], for example, is one of my favorite lyricists, but I don’t think of him as my active competition in the way that I think of Andrew Savage of Parquet Courts — who is the number-one most feared lyricist in my life. That record they put out last year made me want to work really hard to get my bars up, and I can’t say that about almost any of these hipster bands — not that that’s what they are. I wrote them off as that because of the website I learned about Parquet Courts on. That was another example of me being the same kind of dumb-ass that I claim to be trying to destroy...to wipe from the face of this Earth. I let my preconceptions not only get in the way of making my own educated, informed decision, but it kept me from making any decision about it at all...even the decision to listen to it until it smacked me in the face and I couldn’t deny it anymore.”

As a wordsmith, Stickles does realize that he could have knocked out The Most Lamentable Tragedy as a book and saved his bandmates a ton of work. He credits the group for having faith in his vision and sticking with him through a pretty intense recording process. He feels like “the director” of this album, even though “General with the Occasional Disclaimer” would probably be a more appropriate job title.

“If it was a novel, then the novel could sit on somebody’s shelf and not really bother anyone, as opposed to a rock album, which gives me an excuse to get in the van with the rest of the team and go out into Middle America and just ruin it. You know what I mean, just go out there and tear down the walls of every church, school, fucking store...metaphorically speaking, obviously. We’re not gonna do like a full-blown Sherman’s march to the sea as much as I would like to, sometimes, with this morally bankrupt society. It’s about getting out there and screaming about it until everybody believes that it’s true,” Stickles said.

One church whose walls he will get another chance to tear down is the Irenic in North Park. Stickles recalled his experience playing the venue in 2012: “It’s really cool, actually. You get up there and you really do feel like a priest — which is what I really am. I’m just a priest for existential nihilism.”