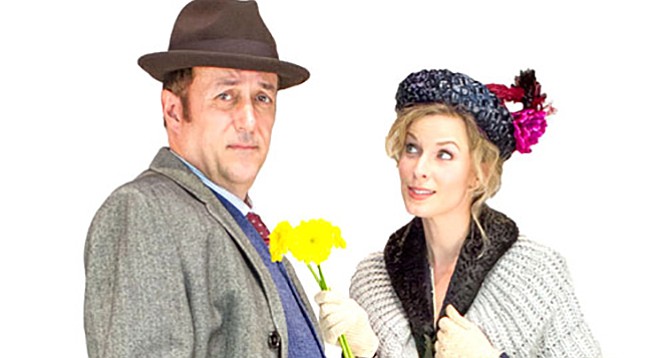 And when suddenly nouveau riche Alfred Doolittle sings about “getting married in the morning,” during his gin-drenched bachelor party, he asks the audience to join in. And we did, in full vocal roar, without the need of revelers bouncing up the aisles and waving encouragement.

A personal touch runs throughout Cygnet’s wonderful My Fair Lady. This isn’t a stately, larger-than-life version of the Lerner & Loewe classic. Rex Harrison’s face isn’t cinemascoped across the screen. The Old Town theater’s comparatively intimate, in fact, made more so by Andrew Hull’s thrust stage.

And to a person, the cast performs as if before friends, not to 2000 stiff Broadway-ites, alert for imperfections, and most needing binoculars to see the show.

Henry Higgins is still the linguist-psychic, able to trace a person’s roots better than wine connoisseurs the journey of a grape. Eliza Doolittle’s still a “goode gull,” hawking bouquets in the rain at Covent Garden. And he still plays Pygmalion, like a modern Petruchio, and raises her social class by improving her voice.

It’s all there, but an infectious exuberance sets this show apart. Thus when Freddie Eynsford-Hill (Charles Evans, Jr.), falls for Eliza, he falls flat on the street where she lives. Why Alfred Doolittle (the inimitable Ron Choularton) and the chorus go plumb crazy dreaming of a “little bit o luck.” And why even condescending, propriety-squared ‘enry ‘iggins (masterful Sean Murray) gets in touch, on occasion, with his abandoned inner child.

And, purists beware, welcomes Eliza back with a bit more feeling than former Henry’s.

Cygnet has moved the musical forward from George Bernard Shaw’s Pygmalion of 1912 to 1938, the year the movie-version appeared. This change accounts for why Higgins uses a black rotary phone and why Jeanne Reith’s excellent costumes favor gray morning coats for the Ascot scene (as opposed to Cecil Beaton’s black and white originals). It also pays homage to Shaw’s screenplay, from which Lerner and Loewe borrowed freely.

Director Sean Murray has what looks to be his “bucket list” cast: Tom Stephenson as genial Pickering and Linda Libby as hyper-snob Mrs. Higgins, and Allison Spratt Pearce, who can do no wrong as Ugly Duckling Eliza.

The book, not counting singing and dancing ensembles, has 36 named characters. Cygnet’s supporting cast — Libby, Evans, Jr. Debra Wanger, Ralph Johnson, Brian Banville and Katie Whalley Banville (who will play Eliza someday) — play all the roles, roll on furniture and props between scenes, and must run a Velcro gauntlet backstage when changing costumes. And donning yet another of Peter Herman’s amazing wigs. His work, which often defines a character in an instant, has been so consistently outstanding, it’s easy to take him for granted. We shouldn’t.

Now maybe it’s just me, and my wary eye for subliminal suggestions, but don’t the tissue-like clouds on the rear wall, above the London skyline, vaguely resemble a map of Africa and India — erstwhile colonies of the now-fading British Empire?