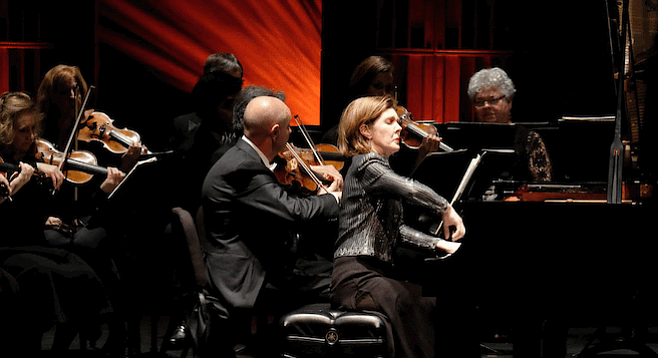 Two chamber concerts and a big ol' symphony this weekend.

The Auditorium at the Scripps Research Institute

Mainly Mozart is giving two Spotlight Series concerts this weekend in two enticing locations. The music is a transcription of Bach's Goldberg Variations for string trio.

The Sunday, March 29 event is at the Fairbanks Ranch Country Club. There will be champagne at 5 p.m., with the concert starting at 5:30 p.m. But wait, there's more. Sunday also comes with a reception and an artist "talk-back."

I don't know about you, but I don't like it when people talk back to me. Hold on — that's something different.

Meanwhile in downtown, the Symphony has Pinchas Zukerman making his annual "play and conduct" visit. This year, the maestro will be playing Bach and conducting Shostakovich.

The Shostakovich will be nothing less than his colossal Symphony No. 10. The Tenth is the first symphony he wrote after his 1948 denunciation. However, I'm a little wary of the whole Stalin-and-art topic, so I'm just going to listen to the Tenth as pure music instead of trying to decode the politics of the past.