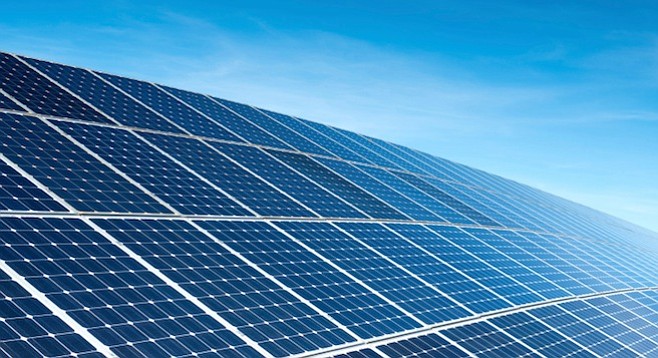 Environmental activists are gearing up for a fight against solar power in the rural borderland East County region of Boulevard, claiming that a proposed solar project will destroy thousands of acres of wildlife habitat.

Backcountry Against Dumps and Donna Tisdale, the group's Boulevard-based leader, have filed a lawsuit against "San Diego County, two lobbyists, several people and companies that have interest in the properties to be developed, and the developers, Soitec Solar, Tierra Del Sol Solar Farm LLC," according to a report from Courthouse News Service.

The group claims that the proposed project, to be constructed by French firm Solar Development, will "destroy 1,185 acres of irreplaceable wildlife habitat and undeveloped open space, and replace it with industrial-scale energy development that will cut through the heart of the quiet and scenic Boulevard community," while depleting groundwater resources, reducing agricultural land, and destroy scenic views with transmission lines supported by poles up to 150 feet tall.

Included in the proposed development are nearly 5700 "tracker" solar panels, which can rotate to more effectively capture energy from the sun, along with a 160 megawatt battery storage system to be housed in an equal number of steel shipping containers. The total power generation from the project would be 140 megawatts, a little more than a tenth of the power-generation capabilities lost with the shuttering of the San Onofre Nuclear Generating Station.

A bit less than half of the total project has already been shot down, when the county's board of supervisors voted against a 2499-panel project that would have supplied 60 megawatts out of the total 140. The second component of the project, which would be sited at the entrance to the McCain Valley Resource Conservation Area, is still slated for eventual construction.

Plaintiffs are basing their case on an environmental impact report they say relies on "weasel words, obfuscation, and unsupported assumptions" to "down play and manipulate Soitec's real world impacts, that will destroy existing rural uses and community character," as well as threaten habitat for several endangered plant and animal species.

The project has been in the works since 2012 and was recently approved, in part, in 2015. Plaintiffs say they've submitted comments throughout the consideration process, including the suggestion of distributing the solar panels among existing structures instead of disturbing the rural landscape.

Backcountry and Tisdale are seeking revocation of the project's approval based on California Environmental Quality Act and county code violations as well as an injunction barring construction from proceeding until a new environmental review is completed.

Whenever Wind Turbines are mentioned some claim that they kill too many birds, so here are some facts to set the record straight:

These are from my trusted sources and/or the web:

Domestic cats in the United States kill up to 3.7 billion birds each year. (6,457x wind)

The Exxon Valdez spill killed almost a half million birds.

Conclusion: Wind turbines are a tiny, tiny cause of bird death.

But bird deaths aren't a good thing regardless of the numbers. So why don't we stick with coal and nuclear energy to save birds? Let's check to see if that would work.

Based on bird kills per gigawatt hour of electricity produced.

OK, so now we know that wind farms are not one of our birds' big problems. And we know that closing nuclear and coal plants and replacing them with wind farms would be better for the birds. Should we stop there?

No, we can make wind farms even safer for birds.

In 2012 there were 9.5 bird kills per MW installed wind capacity.

That’s a 24% decrease. A very major improvement in bird safety.

You left out airplanes. Of course with airplanes sometimes the birds win.

In 2012 there were 9.5 bird kills per MW installed wind capacity.

That’s a 24% decrease. A very major improvement in bird safety. "

Or maybe, it's just that there are fewer birds left to kill.

Seems the "environmentalists" are really just NIMBY's. Wind and solar are ok as long as it is not in their back yard.

You know, I've been driving past the wind farm in San Gorgonio Pass since they started building it in the early '80's. And I have to admit that every time I drive past it, I always ask myself the same question. It's NOT how many birds have the turbines killed; in fact I've never had that thought even a single time. It's why aren't there MORE turbines. The site generates enough electricity to power Palm Springs and the entire Coachella Valley.