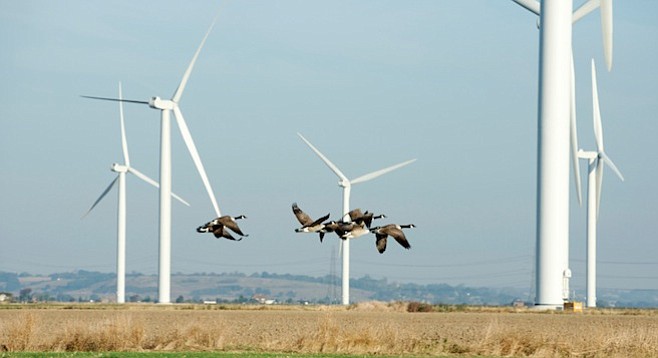 Petition against opening millions of acres to renewable energy apparatus

A group of activists in San Diego's backcountry have launched an online petition seeking to block implementation of the Desert Renewable Energy Conservation Plan, which would potentially open up as many as 22 million acres of desert for renewable energy development in seven counties, including portions of San Diego.

Proponents of the plan's draft, which was released in September, say it could facilitate development of as much as 20,000 megawatts of power generation, roughly nine times as much as San Onofre Nuclear Generating Station was producing before it was shuttered.

Plan authors say that they've also considered the environmental impacts that large-scale solar and wind-power projects would bring upon the land, stating that the plan "specifies species, ecosystem and climate adaptation requirements for 37 covered species and 31 natural communities, as well as the protection of recreation, cultural and other desert resources."

That may not be the case, according to petition author David Garmon, a Borrego Springs resident and president of the Tubb Canyon Desert Conservancy, which is backed by the Desert Protective Council and other local environmental groups.

"The [Desert Protective Council] disagrees with the premise of the [conservation plan], which is to continue expanding renewable energy development in our beleaguered California desert," says Terry Weiner, head of the council. "We are learning from the photovoltaic solar developments in Imperial County that the 'lake effect' of the panels from a bird’s-eye view has caused the death of over 150 species and thousands of individual birds."

The objective, say petition backers, is to force the California Energy Commission to look more closely at smaller rooftop solar projects in the cities where the energy will end up being used, rather than utility-scale projects in the desert that not only require development of open space but also rely on extensive transmission lines to move the power to where demand exists.

Garmon's petition claims, in part: “More renewable energy is available from rooftop solar in San Diego and Los Angeles Counties than will be derived from the siting of utility-scale generating facilities on 2 million acres of desert habitat called for in the Desert Renewable Energy Conservation Plan. The unintended consequences of utility-scale facilities in the desert are becoming known and are unacceptable — dust storms in Lancaster, midair incineration of birds at Ivanpah, depletion of scarce groundwater in Borrego Springs.”

Not all environmental groups are onboard with the panning of the move to site clean power in the desert: the Sierra Club, Center for Biological Diversity, and Nature Conservancy have all signaled their support for the plan.

Public comments on the plan's 8000-page draft were recently extended to run through February 23, 2015.

I am a field engineer for an international power distribution equipment company. I live in San Diego. I have personally paid for rooftop solar, on my house. I take issue with the 'known' consequences statement. If they're known, then state them. I think large arrays of solar panels are relatively harmless. I have worked on them, in the desert and in cities. However, from personal experience, the wind turbines can be dangerous. I found a dead raptor just beneath one turbine in Colorado. The manager there just sighed and called in the ecologist to analyze it (a requirement, I was told). I was also told those turbines are going up to 300 MPH at their tips. Nothing can get out the way of that. And lastly, from my inquiries, onsite, I was told that wind turbines would not be economically advantageous without government subsidies. Solar arrays are. So stop lumping the two together. And if you know some 'known' facts, then state them. And be very clear. And I do agree that we ALL should have rooftop solar. Especially in places like San Diego. Who cares if Sempra profits?

For those of you in that scrub-desert become San Diego, how much water will you use keeping your solar roof clean? We should not all have rooftop solar. I live in a forestsurrounded by tall trees. In summer my roof gets sun about 20% of the day. I expect a covering of snow soon. I can't use wind or solar.

Lets put solar wherever it makes sense, especially on our SoCal rooftops, then require that our Utilities pay us what they pay themselves for the Soar energy generated based upon the time it is generated and added to the Grid!

Now some factual info about Birds and Wind Generation:

Wind turbines are often criticized for killing birds. Fights against siting wind turbines in bird migration corridors or in bird habitat are frequent. Highly inflammatory language is used by anti-wind lobbyists such as ‘bird mincer’, ‘bird blender’ and ‘eagle killers’. Outlandish numbers of deaths are often attributed to them.

Wind farms are a strong net benefit for bird populations, and their direct impacts on bird populations are so insignificant that they can’t be considered a problem compared to the advantages.