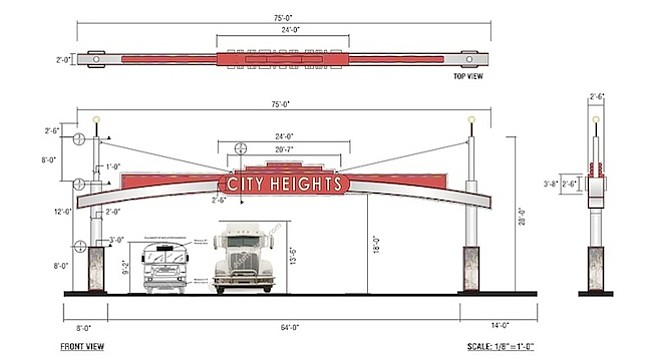 Kenton Finkbeiner wants City Heights to have a sign like other San Diego neighborhoods, including Hillcrest, Kensington, and North Park, to name a few.

City Heights used to have a neighborhood sign, just like 13 other neighborhoods in San Diego County. Most are concentrated in the uptown and downtown neighborhoods, except for Chula Vista, Encinitas, and El Cajon.

But a San Diego Union article dated January 27, 1968, states that the City Heights neighborhood sign (which read “East San Diego,” as the area was called then) was removed from its location at University and Fairmount in the mid-city neighborhood due to street widening and structural damage. At the time, there were no plans to reinstall it, and it was never replaced.

“Now, 48 years later, here we are without a sign when all the other neighborhoods have theirs” he said. “I wanted to wake up the sign project, so I just took the helm.”

In the summer of 2012, Finkbeiner decided to mount his effort to bring the sign back. He went to City Heights–based Signtech.

“They believe in the project and they just wanted to do the project pro bono to get the campaign going,” Finkbeiner said

Lack of funds hasn’t stopped Finkbeiner’s efforts. He said Signtech has already spent hundreds of hours creating a design and drafts of the proposed sign. Finkbeiner is campaigning to get grants, donations, and possibly cash from the city to fund the project.

“It is important culturally for the city, in part because every neighborhood in mid-city has a sign,” said Finkbeiner, a City Heights resident for nine years. “It is one thing that can change the perspective of the people who live on the other side of the 805.”

Signs are nice but sidewalks are better.

Chula Vista, Encinitas, and El Cajon are not "neighborhoods"; they are cities.

Carlsbad has a sign across Carlsbad Blvd. (Coast Hwy.) They said it was a replica from years past. It looks plastic and fake. Design didn't translate to 'da sign.