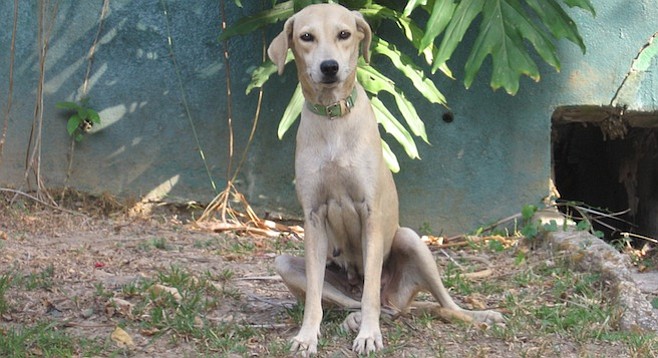 Interim dog park will do

Normal Heights has been waiting for an off-leash dog park for ten years, and it looks like this year it might get it. Sort of.

After holding a dog-park rally in February, collecting 1200 signatures from Normal Heights residents in favor of a dog park, and hounding councilman Todd Gloria for support, mid-city residents got it.

Gloria made a request for $1.2 million in his budget to begin the $7.9 million project and submitted it to mayor Kevin Faulconer, asking him to place it in his 2016 budget.

“The communities of Mid-City deserve to have the expansion of Ward Canyon Park funded,” Gloria said. The would-be dog park is located at the intersection of Normal Heights and Kensington, at the south Adams Avenue I-15 off ramp.

But the mayor has only included funds for an interim dog park in his budget, which is awaiting approval by the San Diego City Council on Tuesday, May 19. But how much money is unknown, and the location is also a mystery.

“I am pleased that the mayor will be funding an interim dog park as a temporary solution,” Gloria said. “But I will continue to fight for the first phase of the permanent expansion to be included in next year’s budget.”

“I could say we’re mad as hell,” Jim Baross, chair of the Normal Heights Community Planning Group. “We’re glad to be mentioned at all, but we’re still not on the list. We’ve been park-deficient forever.”

Ron Fererro-Pham, a Normal Heights resident, business owner, and president of the Normal Heights Community Association, said he is happy the mayor is looking for funds for an interim dog park.

“But all we have right now is the promise that they may put some money in for a temporary solution,” he said.

Normal Heights has courted other funding sources for the dog park, including PetSmart and state Assembly speaker Tony Atkins for state funds.

Ferrero-Pham says the new dog park would serve one-sixth of the city’s dogs and would be the only dog park on the I-15 corridor. Residents and their dogs in Normal Heights, Kensington, Talmadge, City Heights, and even Mission Gorge would benefit from the park.

There is still a chance full funding for the off-leash dog park will go through. Mayor Faulconer could decide to fund it in full before the council votes for approval at 10 a.m. on May 19. Calls to Faulconer’s office brought no response.

“If it’s the best we can do for now, we’ll take it,” Ferrero-Pham said.

Office of the Mayor and IBA have confirmed that there is at least $737 million in Cash that is available for CIP Infrastructure projects in these little known Fund Balances. Some of which have not been accessed in over 10 years.

For example the Environmental Growth Fund has $4,204,000 is Unencumbered Cash, with no current spending plans for Individual Fund Balances.

Mayor Faulconer's FY-2016 May Revise Budget will be heard at the Budget Review Committee on Thursday May 21, 2015 at 10 am. Not Tuesday's City Council meeting.

So far the actual May Revised has not been posted online.

And let me say again, I really don't understand people who own dogs without enough room to play with them. To expect the city to provide them with a playground for their pooches that all the taxpayers have to pay for while other parts of the city have real needs that go unmet irks me.

I don't know what problems your area of Sherman Heights has, but this has to do with the Normal Heights area and those citizens' issues. As for people not having enough room to play with dogs, if everyone who had a dog was required to have a big yard, then dog ownership would be vastly reduced, and the increase in euthanized dogs (for the convenience of people and shelters who can't house them) would be greatly increased. I don't have children, but expecting the city to provide schools at the expense of all taxpayers is the price you pay for living in a society. Tax paying is not a la carte. I'm sorry you don't have something kind to say about the possibility of a new, needed and welcome dog park in the NH-Kensington area. Oh, and even if you are able to only have one dog, all dogs need to be socialized, which is another big benefit of dog parks.

I could say the same thing about schools that I, a childless taxpayer, has to pay for. Or churches that I, an Atheist, must support through tax-exemptions. I have to drive my car everywhere because we have no usable public transit from my area of the city. Should I be upset because other areas of the city have trolleys and bus service? "Because it's not important to me, it isn't important" is not a valid argument. It is important because it would improve quality of life in that area.

Normal Heights "shares" some of the same "amenities" that are missing in Sherman Heights. We don't have a pool, a library, or a senior center. However, we do have two small "people parks" and a rec. center, which was not on the list of rec. centers that will receive more hours in the Mayor's budget. Our CIP list is long, but at the top of that list, compiled after three outreach meetings with the community, is the completion of Ward Canyon Neighborhood Park. This is a step in the process, but the word I've heard about the off-leash dog park is "interim" and that worries me.