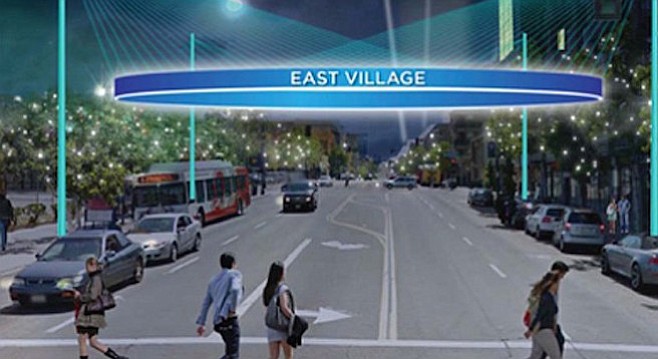 Downtown’s East Village will soon join the Gaslamp Quarter by having their own landmark community sign on Market Street, midblock between 10th and 11th. 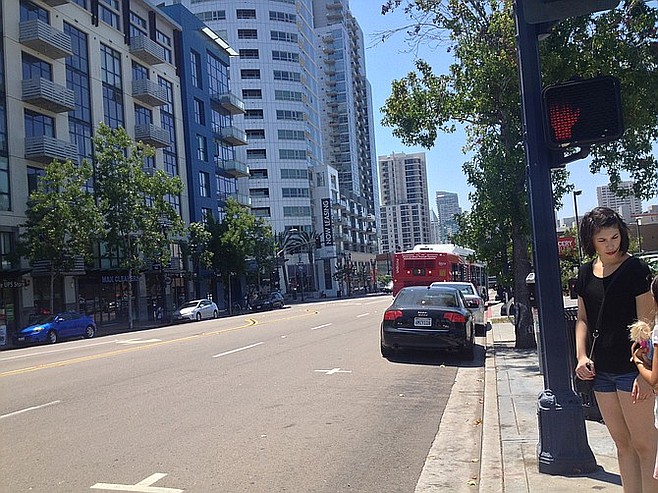 The sign will be installed mid-block on Market Street between 10th and 11th avenues.

On July 27, East Village Association members met at Tod Firotto’s office at San Diego Restaurant Supply, a business that has been sited in East Village for more than 50 years. Also joining the meeting was Lisa Lem, executive director of the association, and association president, David Hazan.

Lem said they had a lot of community input for the sign's design, with at least ten public meetings. “It came down to wanting something different than all the other signs in San Diego. And the firm we hired, Selbert Perkins, delivered. This sign doesn’t look like any other sign in San Diego. The ring symbolizes what an inclusive neighborhood East Village is and it also symbolizes infinity, which is about wanting the neighborhood to keep thriving.”

Lem said that since the sign became a goal in 2010 nearly $189,000 has been raised of the needed $500,000. Lem explained that they’re pooling association assets to get going on the project, but fundraising will continue so that the project will be funded entirely by private donations. 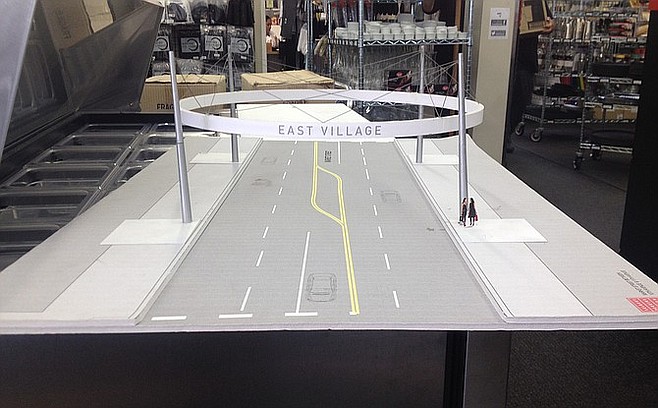 “The way the sign is designed, we can actually have video streaming on the inside."

“Most other community signs in San Diego were built with redevelopment money. We don’t have a single dollar from redevelopment money," said Lem. "This is hard-scrabbling grassroots. We’re talking people like from The District [gourmet sandwich shop] saying for every sandwich someone buys, we’ll donate a dollar. We have people that created an East Village Monopoly game that we sold. We did a block party, bake sales — you name it — we did it to raise money.”

With the design approved, the target date to file permits is August 15. The fabrication will begin as soon as permits are issued, they hope no later than mid-October. Local company Sign-Age is doing the fabrication and Hughes Marino is managing the project. As long as everything goes according to plans, installation is set for the end of November.

Firotto then brought up a feature of the sign that Lem elaborated on. She said, “The way the sign is designed, we can actually have video streaming on the inside. It’s the type of sign that can be upgraded in the future.”

I asked Hazen if East Village had ever had a sign in the past. He said that the community was named only about 25 years ago by some San Diegans who owned a lot of property in the area.

Chris Quinn lives on 15th and Market in East Village. “I think the idea of the sign is terrific," he said. "I think it’ll help the neighborhood by giving it a true identity. The East Village is a great neighborhood to live in and has nowhere to go but up as it admittedly could use a bit of help with the homeless issue.”