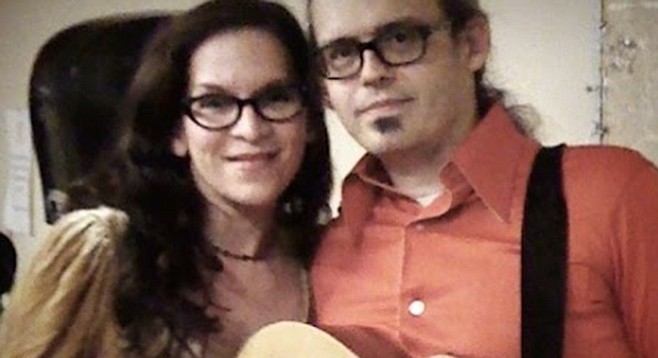 On Sunday, June 21, as part of the Balboa Park Centennial, San Diego will join some 700 cities around the globe in a one-day event called Make Music Day. First launched in France in 1982, Make Music Day has become an annual celebration of all things music, and until this year, San Diego has not participated. The hometown connection to the event came about as the result of a recent New York transplant named Andy Horwitz.

“My wife is a playwright and she got a teaching job at UCSD. That’s what brought us to San Diego. Once we got out here, I wasn’t sure what I was going to do.” Horwitz, 46, had his own experience to draw on. “I ran an arts festival back in New York. I was director of programs for the Lower Manhattan Cultural Council.” He and his wife now live in South Park.

Live performance of Birdy and the Bow Tie

But while Horwitz was still on the East Coast, an associate started a chapter of Make Music Day in New York. He thought the same might work in San Diego. “When I moved here, the first thing I did was to get out and meet people. For the first seven months, I went on a listening tour.” He was impressed with what he heard. “There’s a great DIY music community in San Diego, everything from jazz, folk, classical, blues,” Horwitz says. “Music from Africa.” Incredulity seeps into his voice as he says the words. “It’s just amazing.”

In San Diego, Make Music Day will happen in various areas all throughout Balboa Park. It is free and open to all ages. “It’s not a traditional music festival. It’s about making music in public. We’re not going to have stages and amplifiers. There won’t be a blues stage, or an indie-rock stage. Music events instead will be on the lawns and in places like the Zoro gardens. There’ll be hands-on instrument making. When you enter the park, maybe you’ll be drawn to what we call a mass-appeal event.”

Ukulele, for example. Alison Marae and Wil Forbis of Birdy and the Bow Tie are going to host a mass ukulele-playing event, he says. “We’re working on something called the bluegrass slow jam,” he says, “with Janet Beazley. You can come and bring your instruments and play along. We’re looking for harmonicas, too, and maybe guitars.” In fact, Horwitz says they are open to more ideas. “We can’t just open it up to anybody, but if it’s successful this year, we hope to open it up so that people can do whatever they want.” Ideas can be submitted to makemusicsd.org.