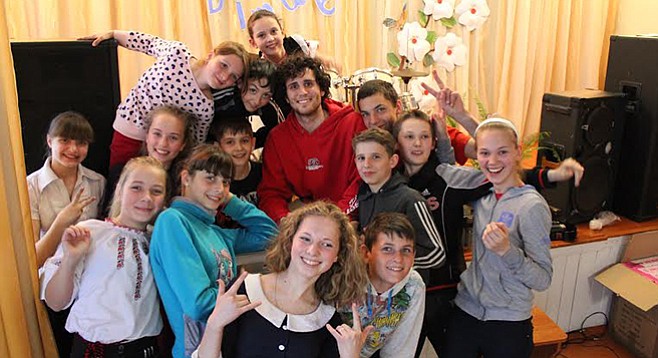 “Do I play the ukulele? Yeah. I actually do,” Quinn Boylan, the former Tan Sister Radio bassist tells the Reader. “When I was coming up with this project, I decided I’d better learn how. It’s pretty simple to pick up,” he explains. “It’s like an open tuning.” In other words, one can make a sound that is pleasing to the ears by simply strumming a uke’s strings. “Or, you can do a chord by just pressing your finger on one string.” And ukuleles are small and can be had cheaply, both important factors when Boylan and a Brit named Mark Griffith decided to bring music to orphaned children in the Ukraine.

“I was in the UK last year,” Boylan says. “My mother is from England. I went to university there. I had a two-week vacation, and I wanted to do some volunteering. I decided to go to the Ukraine.” Why? The 25-year-old resident of Encinitas says he knew there were children living in below-poverty conditions there or in institutions and children’s homes. “I wanted to add some value to their lives. Being a musician, I thought maybe I could give lessons. But, guitars seemed like too much, and pianos are too big.” Hence, the ukulele. “It just clicked: Ukuleles for the Ukraine.”

Boylan says he began hanging around ukulele jams in England, where he found a kindred spirit in the form of Griffith, who both performs and runs a large ukulele play-along in a café there. Together, he and Boylan put out a plea for contributions on GoFundMe.com and raised $5000. Next stop, the Ukraine. “We also got 150 ukuleles donated,” Boylan says, “and with that money we bought clothing, medicine, eyeglasses, and supplies,” such as sporting goods, shoes, and school supplies. Boylan admits he speaks not one word of the language, but the experience was positive. “It was kind of beautiful,” Boylan says in the narration of a film he and Griffith made of the experience titled Ukuleles for the Ukraine.

While the film shows images of well-dressed kids and smiling adults and pleasant street views, “You could tell a war was going on there due to the military presence,” he recalls. If there is a larger subtext to Boylan’s mission, it is that he’d like to inspire others to do more of the same. “We’re trying to encourage people to get out and do more volunteering.” He and Griffith plan to raise more money and eventually go back with more supplies, more ukuleles, and this time around, technology.

“Those kids don’t have computers or computer access,” Boylan says. “It’s pretty hard to grow up in this day and age without that.”