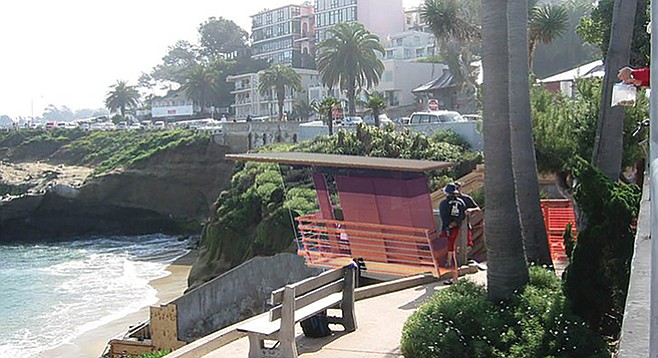 Anyone who has visited La Jolla Cove this year most likely has noticed the construction project on the grassy knoll above the cove. APR Construction, Inc. was chosen to replace the old lifeguard tower, which seemed okay by me. I’ve seen worse.

Most people have taken the project in stride with few complaints, especially with last year’s legendary Gatorman Pier swim cancelled as a result of the construction. That is starting to change, however, with some business owners wondering about the length of the project.

The La Jolla Cove project was started in February 2014. A six-foot polymer fence was my first exposure in April 2014. 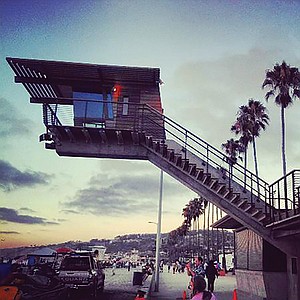 Why so long? One year and 100 days so far — longer than it took to build the Empire State Building. While there were issues with the design of the lifeguard tower at La Jolla Shores, it is unclear whether this had any effect on the cove project timeline, given the decision to use the same design for both towers. There is a third tower in progress at Children’s Cove, which was delayed during sea lion pupping season.

It appears the cove project is nearing completion with the ADA-compliant ramp and electrical wiring in place. One would hope the project is completed and the grassy area renovated before we get too far into the summer.

I liked your comment, "I've seen worse," as a testament to simplicity.

So if you think the Cove lifeguard tower is taking a long time and verging on grandiose, stay tuned for the coming total rebuilding of bathrooms and showers at the adjacent Cove park. It is La Jolla and private funds are being raised!

Some have questioned the need for any of these interminable lifeguard station projects, since the entire Cove area has become colonized by legally protected stinking sea lions who sometimes bite tourists and block stairways to the beach. The Casa Cove site you mention was closed for six months for seal pupping and has just reopened.

I think there's a new summer movie coming about wild animals taking back their turf.

It's a summer TV series on CBS.