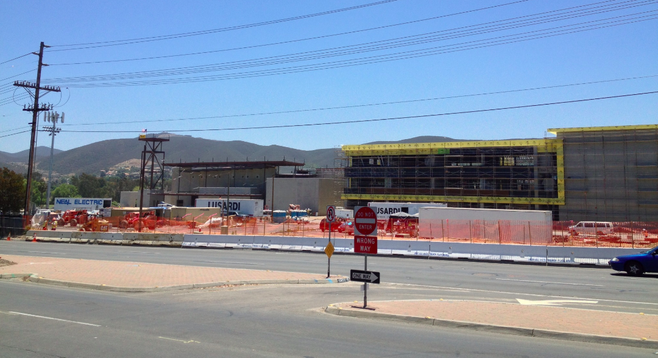 Construction of San Marcos High School to last all year

About 2300 students have been housed in approximately 100 modular units at the “interim campus” of San Marcos High School for the past year and a half, since demolition and then construction began on their new school. By August 2013, at least some of the seven buildings are expected to be ready.

The $180 million project is part of Proposition K’s general obligation bonds, approved by citizens in November 2010. The nearly 430,000-square-foot high school consists of a variety of buildings constructed in three phases.

The gym and engineering buildings are part of the first phase, and students can expect to begin utilizing those at the start of the 2013 school year, according to Nick Novak, senior project manager for Lusardi Construction Company.

By January 2014, the main classroom building and theater should be completed, Novak said. “It’s going to look like a university,” he said. One of its main features is “the cube.”

“The new school will have a new classroom building up to four stories, a lot of glass windows, and exposed concrete,” said Novak, describing "the cube." The theater building seats 400 and is similar to the seating design at the Staples Center in Los Angeles, he said.

The construction combines a variety of methods: tilt-up, cast-in-place, structural steel, and masonry. Several buildings feature some of the largest tilt-up panels in San Diego County, according to Novak.

By August 2014, the final phase is projected to be completed, including the renovated ballfields.

Currently, the temporary modular buildings are located on the school’s future parking lot. The original campus was built in 1960 for 1500 students. The new school will accommodate 3000 students.