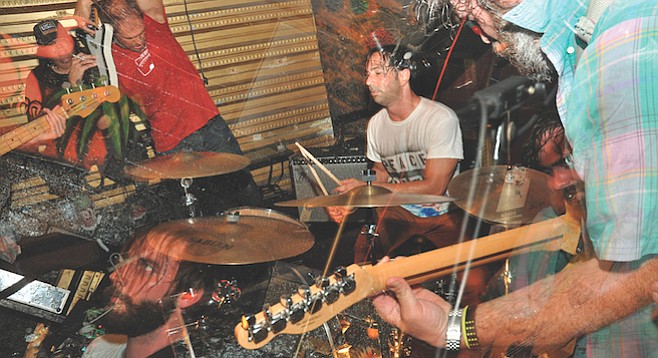 Octagrape: what a strange band

“Hazy rabbits-foot jams” — what a strange band Octagrape is, and I mean that in a good way. Over the three years of this quartet’s life, fans and pop-music critics alike have put every possible genre tag on them, including experimental, psych, art-rock, no-wave, noise, and on and on. They’ve been favorably compared to past acts such as Tom Verlaine and Marc Bolan, which is to liken a racehorse to a greyhound: yes, both are quick, but each is about as different as you can get and still be in the same conversation.

What I hear when Octagrape plays is a combination of everything that makes a kid want to stack amplifiers in a garage and play music with friends. A large piece of their sound reminds one of that hairy old era when garage rock was still pretty much undiscovered territory. Octagrape slaps a listener in the face with that same childhood-rocker energy, the sonic assault that comes along with the mastery on electric guitar of simple power chords and learning when to apply them for maximum effect.

Octagrape is Glen Galloway on vox and guitars, Jason Begin on guitars, bassist Alexander Dausche, and Ely Moyal on drums. Creative originals, yes, but they are also one hell of a cover band. Consider Octagrape’s grip on the borrowed material in last year’s Major Mayor Maxion Marble. But the truer beauty of Octagrape lies in their potential. Every scrap of music on record to date from them is brilliant in a way that says this is a band that is either (a) trying to figure out their way, (b) possibly clueless as to just how good they really are, or (c) a group that is stringing us along with bits and pieces of rare magic while they figure it out for themselves.

I think there’s a full-length masterpiece waiting to be recorded. Or two.