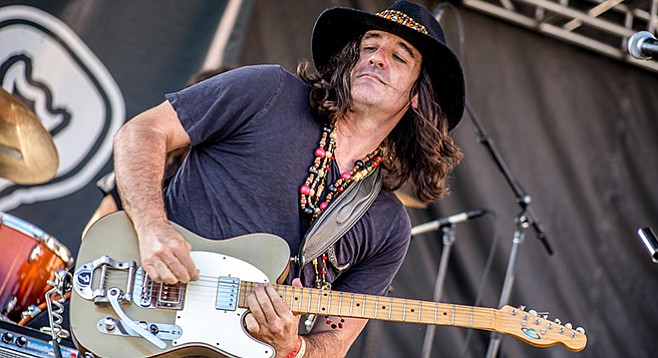 It wasn’t long ago that a fellow musician and I were having coffee near Cowles Mountain and trying to figure out Scott Tournet’s new project. We’d both listened to his new album with his new band. All good, we decided, but what to call this Elektric Voodoo sound? We exhausted about a dozen clichés in the process: Afro beat, space blues, garage rock, psychedelic rock, world beat, vintage rock, Latin rock, you name it. Why? Because it’s all represented in Tournet’s songs, tight little four-to-seven-minute torrents that include everything. Everything, that is, except guitar heroics, which is what he made a career of as a founding member of the Nocturnals.

Tournet toured with Grace Potter and the Nocturnals for more than a dozen years. His guitar drove that band’s Stones-ish pop-rock sound, both as a soloist and as rhythm support. Now that he’s out and doing his own thing, you can hear trace elements of his Nocturnals guitar in the new work, but in an entirely different frame. For example, this music he’s making with the Elektric Voodoo quintet starts at the bottom with congas, drums, and electric bass guitar and it moves its way up the ladder. It’s highly rhythmic, but not necessarily predictable. I figured he’d go on making Nocturnals-sounding records, but no.

Elektric Voodoo and the Lucy Ring

The self-titled debut is a collection of pent-up enthusiasms and thoughts; a bunch of music crafted as the result of Tournet’s having spent so many years on a tour bus. Congrats, by the way, to the local musicians who landed slots in Elektric Voodoo. They include Matt Bozzone on drums, percussionist Ty Kiernan, and Evan Lucas on bass. Add Mark Boyce from the Blues Explosion on keys, with Tournet on guitar, harmonica, and vocals. It’s an arena band minus the arena — unassuming, likable, and changing. In the end, my friend and I agreed to just to call it music.

The Lucy Ring and Stripes and Lines also perform.